With unprecedented instant access to music from every corner of the globe, traditional metrics of quality are becoming obsolete. Like the rotting wooden pillars of an abandoned pier, the sand that once held them in place is gradually eroding, swept away by overwhelming tides of content.

Cast adrift in a vast ocean, the sheer volume of music now available has destroyed any frame of reference previously employed to judge quality. Rarely does music immediately inspire joy or revulsion anymore. The majority is simply…good. Studies which attempted to pinpoint why different personality types are attracted to certain styles of music are losing their relevance. Content saturation has made interaction with music casual, a fleeting stumble from one noise to the next. In the age of the internet, accidents, happy or unhappy, govern musical journeys more than anything else. With no emotional or financial investment behind it, feeling whithers.

In the face of such changes, live music and local scenes are irreplaceable. As with so many things these days, buying local can be a virtue. In terms of music it’s a workable way to filter out unnecessary noise. It’s certainly not the only or even the best metric of quality, but if nothing else it’s undeniably a fixed point, an anchor to orientate oneself in a confusing world. A way to humanise music again, tie it to the immediate environment that it comes from. Better that than an endless playlist of indistinguishable noise, forgotten as easily as it was found.

Ahem, aaaaanyway, enough of the melodramatic hyperbole, here’s another set of the best from our very own shores.

‘We are Godrythmm, and we are the dead’, so began another slab of good old fashioned doom metal. Although barely two years in these guys come from impressive British metal pedigree. Hamish Glencross of My Dying Bride and Vallenfyre fame heads up this latest chapter in doom metal, backed up by an impressive rhythm section headed by Shaun Tyler-Steels, also of My Dying Bride. His energetic drumming keeps the music driving forward, avoiding the monotony that so much doom metal is prone to. 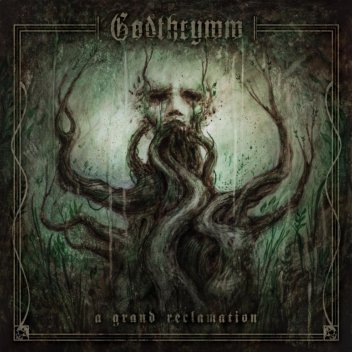 Their debut EP ‘A Grand Reclamation’ released in 2018 showcases their brand of epic yet energetic doom metal. Fans of the style like myself apparently can’t get enough of it, whilst others may dismiss it as overly cheesy. For my money, epic doom metal’s disregard for the inhibitions that shackle their stoner cousins makes for a more immersive musical experience. Whatever your take it, there is no doubt that Godthrymm excel at it.

It’s early days for these guys yet, made up of members of Mountains Crave (now disbanded), Sloth Hammer, and A Forest of Stars no less. Based right here in Leeds, I managed to catch them at their very first show late last year, supporting Conan and Conjurer. And already they impressed. There sound could roughly be described as depressive doom metal mixed with sludge. With a lot of emphasis on ‘depressive’. Some nods to black metal are mixed in for good measure, which is hardly surprising given the background of their clientele.

They patiently develop their music to crescendos, through layering long, meandering guitar riffs that gradually build and fall. This is accompanied by vocals that stretch from high pitched shrieking, to guttural growls, and I even thought I heard some Mongolian throat singing somewhere in the mix, just for good measure. They are only one demo into recorded material so far, but hopefully we will see much more from them this year.

Boasting more cross appeal than the Marvel Cinematic Universe, London’s Vodun formed back in 2013. With their second LP ‘Ascend’ released in 2018 on the heavy-not-metal label New Heavy Sounds, they are finally getting the recognition they deserve. And cross appeal is truly where their power lies. The diversity of punters at their gigs says it all. Heavy doses of stoner doom and classic psychedelia will keep the metalheads and rockers interested, but there is much else besides seamlessly churned into this mix that their sound transcends an already saturated genre.

Chantal Brown’s vocals are more powerful and melodic than is typical in this style. Her soulful voice affords Vodun more dynamics than many of their peers. Despite donning colourful hippie apparel for live shows, the lyrics speak of protest and revolution throughout history. They are celebratory as much as they are a call to arms. Guitarist Lindsay Hamilton is able to leapfrog through styles from stoner metal, to power metal, to blues, to jazz and many more at a dazzling rate; without the music becoming a haphazard mess. All this is underpinned talented skin basher Zel Kaute, who operates at times as a lead instrument as much as rhythm keeper. Her interaction with Hamilton is a joy to behold. Highly recommended to those with ears.

Ireland’s Beithioch are a funny one. Having formed all the way back in 2002 their music can range from unlistenable lo-fi black metal, to chunky death doom, to atmospheric dark metal. Whatever release you go for, this really is not for the faint hearted however. Their latest LPs ‘Conquest’ (2015) and ‘Ghost of a World Long Forgotten’ (2016) are a testament to how prolific they have been of late. And both showcase their current penchant for chasmic death/doom metal. A labour of patience and love.

Sheffield’s Kurokuma are fast becoming the new darlings of British sludge. In a genre saturated by over indulgent, bloated, guitar drone music, Kurokuma are a breath of fresh air. Their debut EP ‘Advorsus’ (2016) demonstrated an aptitude for deliciously groovy, heavy riffs, with experimental elements sufficiently reigned in to avoid the tiresome trappings of much sludge metal. A dual vocal attack also contributes significantly to the energy of this music. On their second EP ‘Dope Rider’ (2018) they let their hair down somewhat, with just two much slower tracks of droning sludge that are surprisingly understated for such heavy music. 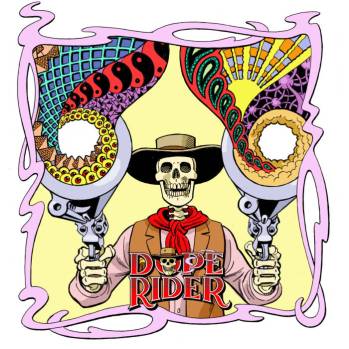 Despite almost relentlessly gigging for the last two years I have somehow only managed to catch them twice, but both times they have impressed. They are bound to drop into your home town at some point soon. Here’s hoping a full length is in the offing for these guys in the near future.

Birmingham’s Haerken were a hard one to take seriously before I saw them play. I was at a gig at Temple of Boom and noticed what looked like some LARPers lurking in the crowd near the gear. ‘Right’, I thought, ‘It’s gonna be that kind of night’. But when they took to the stage, instead of a plethora of fiddles and horns that I would expect from a folk metal band, they just picked up some guitars and got behind a drum kit and pounded out some straight up epic death metal. 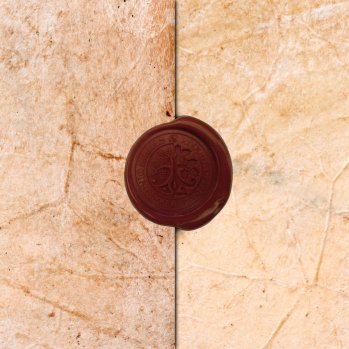 It may not be the most original sound going, having antecedents in Bolt Thrower, early Amorphis, and I can even hear some modern Graveland in there as well. But somewhere between melodic death metal, Viking metal, and folk metal, sits the sound of Haerken. Straight forward, no nonsense and undeniably fun, their sole LP ‘…Of Warriors and Kings’ (2014) comes highly recommended. I will keep an eye out for more to follow.

Newcastle’s Horrified started life as a straight up death metal outfit back in 2012. With the release of their debut LP ‘Descent into Putridity’ in 2012 they put a pin in that style and moved on, gradually evolving into a much more epic beast. Their latest LP, 2017’s ‘Allure of the Fallen’ is as expansive as the cover art suggests. Dan Alderon’s vocals call to mind the pained rasp of Martin van Drunen of Asphyx fame, and Horrified’s music does call to mind some of the more epic moments of their Dutch forebears.

But on AOTF Horrified have shed what little thrash roots remaining in death metal for something much more melodic. They take us through a blur of tremolo strummed riffs underpinned by drums usually set at a marching pace when not simply blast beating. The result is certainly heavy, but also funereal, mournful, contemplative. For any established fan of death and black metal, the music of Horrified provides space for reflection rarely found within such heavy riffage.

Another doom metal affair, this time on the more emotive side. I first caught these guys supporting Black Moth in Leeds. Since then they have released their second LP, 2018’s ‘Fed Into the Nihilist Engine’. A more diverse offering than their debut ‘Welcome to Nothing’ (2016), FITNE looks to everything from Tiptykon to My Bloody Valentine for influence, with some loose blues rhythms thrown in for good measure. Vocals range from melancholy clean singing to full on cries of despair. 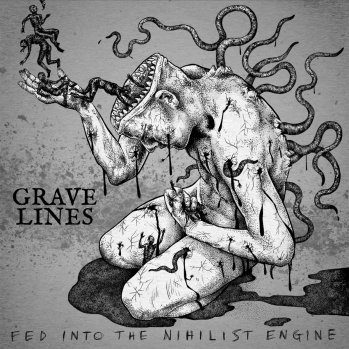 More importantly their compositions have developed dramatically on this release. They build and layer their sound to create passages of varying intensity and periods of calm. But atmosphere is the key more than riffs and melodies. The music is held at a descent pace by drummer Julia Owen, whilst the rest of band stretch out different ideas until they become clashes of competing moods. The result is aggressively ambient rock, as opposed to music with a clear beginning middle and end. Other artists have taken this to further extremes, but Grave Lines are masters of walking the line between pure drone and more recognisable music one could hum to. This one’s for fans of alternative music in general well metal’s dirty little corner. We will be seeing a lot more from these London doomstas in the coming months I’m sure.

Rugby’s Conjurer are upsettingly young. A reminder that I am now old enough to have witnessed a generational shift in the acts taking to the stage in recent years. Their age comes through in their live shows as well, as all four of them bounce off the walls to get the music out of their systems. Their sound calls on black metal, sludge, and funeral doom, blending it all together in a sometimes aggressive churn, other times darkly atmospheric. Very occasionally they hint at screamo (shudder), but a darker, more mature take on the form. 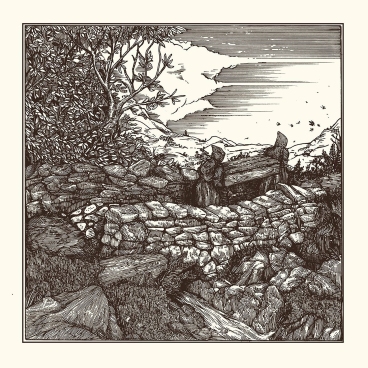 Another diverse vocal attack is in the offing on their debut LP ‘Mire’ (2018), with a screecher, a growler, and a wailer (the dwarfs Disney didn’t tell you about). Their ability to go from out of control noise, to drone, to groove is a joy to behold live. Their music relies on rhythmic diversity as much as melodic riffs. I haven’t been able to avoid these guys on the all dayer circuit lately, having accidentally seen them live at least ten times now. Their youth irks me. But there’s no escaping the fact that their blend of on-trend metal is working for them.

Unleashed may have kicked off the whole Viking themed death metal subgenre, but their early 90s output was always insufferably bland when compared to their Swedish peers Dismember or Entombed. Bradford’s own Valafar suffer from no such shortcomings. Showcasing an impressive talent for riffcraft that avoids becoming haphazard or random. This is both epic and aggressive death metal that should satisfy any fan of this style. Their debut LP 2015’s ‘Helheim’ offered a surprising amount of cold atmosphere mixed into the meaty death and thrash metal riffage. 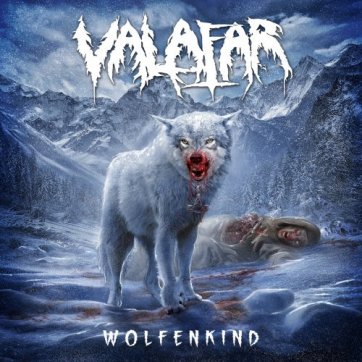 Follow up ‘Wolfenkin’ (2018) is a slower more brooding affair, but sill crushingly heavy. Fans of this brand of no nonsense death metal already know who they are, and people averse to it are in error.

That’s all from me. Enjoy the playlist, and stay tuned for volume III.

5 thoughts on “I like the beats and I like the yelling: what’s doing in British metal today”