In terms of analysing the listenability of different styles of metal,  I find it helps to think of a solar system. At the centre, making up the sun, would be universally recognisable giants such as Iron Maiden or Metallica. If you head out in one direction you may come across gas giants like Cannibal Corpse and Napalm Death, head off in the other direction you meet Mastodon, Opeth, and Gojira. But the further you head out in any direction the weirder the music gets. This extremity is not defined by sheer unadulterated noise, but measured by how much it resembles music. Out in the cold, beyond the far reaches of Pluto, beyond the noise fanatics, one trick grind fans, and post black metal (urgh), lie artists like Mordor and VON.

Switzerland’s Mordor, formed of black metal pedigree Arog back in 1987, revamped into Mordor in 1990, and shifted musical direction away from guitar based music to what could broadly be described as dark ambient on their first EP ‘Odes’ (1991). Aesthetically similar to black metal in many ways, this music holds the same broad appeal as black metal of the time, but through different musical components. Follow up ‘Csejthe’ (1992) is both a different beast entirely yet the exact same thing. To understand the music of Mordor it is not enough to say that it sits somewhere between dark ambient and lo-fi black metal. This is true in the sense that it is daaark music…devoid of structure, and built more of a tapestry of contrasting moods. But the actual building blocks borrow from industrial, post-punk, and avant-garde as much as they do anything remotely ‘metal’.

‘Csejthe’ is divided into tracks that make up roughly a full albums worth of material. But ‘tracks’ are hardly the fitting demarcations to analyse this album. Through the use of minimal synths, sparing guitars reminiscent of early gothic rock, a drum machine, and distant growls and chants, Mordor take us on a journey of disconnected but unsettlingly compelling experiences. It’s like navigating a large deserted castle, or a set of underground passageways without any bearing or notion of where you’re heading. Behind each door is a new horror, an unknown torture. We become accustomed to this only to move on to the next chamber and the new terror it may hold.

The drum machine works its way through simple yet weirdly groovy rhythms. Guitars occasionally find themselves getting carried along with this, and the music picks up into a creepy death march, only to conclude in stagnation, complemented by discord, usually played on a synth, offset by repeated lyrics uttered like an incantation. One can feel the frustration of the music building this tension, only to take it all away and move on to the next idea as if nothing that’s gone before even mattered. This leads me back to the inescapable idea that this is like a highly disorientating nocturnal journey without end or resolution. This will appeal to black metal, dark ambient, and funeral doom fans alike, and indeed the basic building blocks that make up the music borrow from all three styles, but ‘Csejthe’ does not fit comfortably into any such category, nor indeed into one’s mind for that matter. The closest anyone has come to such an unsettlingly creepy sound is Beherit on their ambient/electronica works.

San Francisco was not really known for its black metal back in the early 1990s. And had it not been for Varg Vikernes donning a VON t-shirt in court during his trial for arson, VON may have festered in the obscure annuls of history. As it is, recent revival aside, their sole EP ‘Satanic Blood’ (1992) became a cult classic. I say classic…these days one is granted more creds for hating on it these days than for simply being aware of it. In this day and age ‘Satanic Blood’ is hyped up as the last word in obscure black metal from all the way back in 1992, way before black metal rose to infamy. Yet more recently it has been hyped-down as a crock of shit that would have been forgotten were it not for all counter-hype *sigh*.

So what to make of ‘Satanic Blood’? I actually really love it. For anyone familiar with Ildjarn or early Profanatica the production will strike one as not entirely terrible. It’s raw certainly, but serviceable for simple, trancelike black metal. Drums are a thin yet relentless pulse that underpins simple tremolo-picked riffs of simple minor chord progressions with the occasional  lead guitar, working through complementary harmonies and melodies. Vocals are a very simple, staccato bark, with so much delay it’s impossible to discern what little lyrics there are. 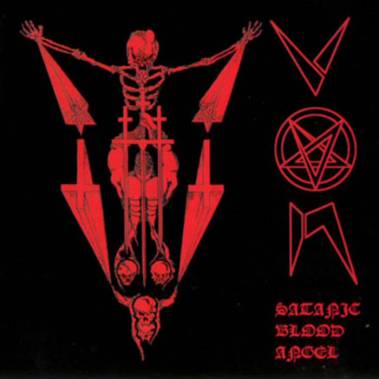 Where VON really shine is riffs and sequences with some repeatability. I used ‘trancelike’ earlier because this music (pretty much) works one into a trance; it makes one amenable to subduing higher cognitive functions in preparation for ritual. Indeed, ritual black metal is the closest one comes to a label for this obscure music. A simple repeated slogan barked out over and over again will often accompany these loops which only adds to the subtle mania of this music. And that’s really the crux of the matter. The appeal of ‘Satanic Blood’ is not in the rawness of the music, but the simple yet elegant looped riffs that burrow into one’s mind. For that reason, this is one of the few releases where I feel that it could have done with being a bit longer (runtime’s about twenty five minutes) to really hammer home this pure black energy. The rebooted VON release ‘Dark Gods: Seven Billion Slaves’ (2013) addressed some of this, but I’ll get deeper into that another time.

So VON’s cult classic is not nearly as bad as the naysayers would have you believe, and I feel it necessary to redress the balance somewhat. It is not a mind blowing release by any stretch. But it is an essential piece of history and a curiosity in its own right for any budding guardian of black metal culture. But pitting it against Mordor’s ‘Csjethes’ was a bit unfair, because this latter release is simply too weird not to be pick of the week.

Mordor sits well beyond the shadow of Pluto on the very edge of the sun’s orbit, not through blast beats and unrelenting distortion, but through being nightmarishly creepy. Enough familiar features of music are dangled before the listener only to be distorted, disfigured, mutilated. Like rewriting a child’s dreams and fantasies, turning them into something beyond fear. Maybe I didn’t talk it up enough in the above analysis, because as music it seems to rearrange your psyche at the sub-atomic level. I’ll let you decide if that’s a recommendation or not.