Over a ten year period, many subgenres of metal tend to follow the same basic pattern. The odd thing is, these patterns are not really visible until after the fact. Roughly speaking, they go from a ‘proto’ period, to a heyday, to a progressive offshoot, and then eventual stagnation. But no one is aware that they are living in the proto period until it leads somewhere. Black metal began around 1985 with Bathory and Celtic Frost et al. It solidified after a series of consistent releases from diverse artists from around 1990 to 1994. After this came a slew of avant-garde and progressive variations, with artist such as Emperor and Enslaved leading the way.

After this ten year period many thought that black metal had run out of steam, just as people did with death metal a few years before, and thrash before that. The timings, intensity, and quality of these periods will vary from movement to movement. What happens afterwards is normally a period of entropy, with ever more specific subgenres crawling out of the dirt. This has been exacerbated with the rise of the internet.

Back in 1995 just after the heyday of black metal, it was still considered an aberration by many metalheads. But around this time its own versions of progressive and avant-garde music came to fruition, and it proved to be every bit as fucking weird as you would expect of an-aberration-of-an-aberration.

Necromantia didn’t so much buck the trend of Hellenic black metal as they did extreme metal as a whole. They created ghoulish occult metal superficially notable owing to the use of a six string bass repurposed as a rhythm guitar, and sporadic use of a saxophone. Such service level adornments are only a small part of the story however. After a promising split EP with Varathron in 1992 (Black Arts / The Everlasting Sins), their debut ‘Crossing the Fiery Path’ (1993) showed some promise, but suffered from a disconnected structure that lacked momentum. Follow up, 1995’s ‘Scarlet Evil, Witching Black’ saw them overcome these shortcomings and deliver a masterpiece of weird as fuck extreme metal we all knew they were capable of. 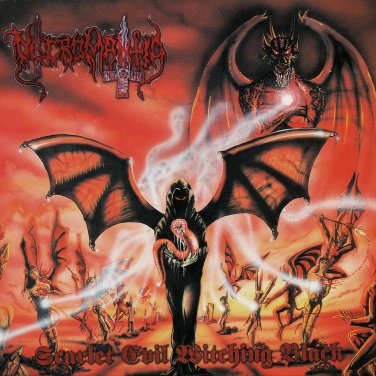 This album sees them move closer to some of the heavy metal leanings typical of Greek black metal, but through the lens of their trademark muddy bass as acting rhythm guitar. This is mixed with cheap but charming keyboards and ghoulishly distorted vocals. Drums are serviceable for this mid paced music. The snare drum has an industrial quality to it, reminiscent of the infamous ‘smash’ sound found on Death’s ‘Leprosy’ (1988). Before SEWB Necromentia were notable for their intriguing brand of creepy, primitive metal. But they often broke up the metal tracks with extended interludes of Mediterranean dungeon synth, made up of saxophones and bass solos as well as cheap keyboard effects and minimal chanting. These were interesting, but as mentioned, it was to the detriment of the structure.

On this release these more avant-garde elements have been worked into Necromentia’s already idiosyncratic approach to extreme metal, making for a streamlined and ultimately more engaging experience. It calls on everything from Greece’s melodic approach to black metal, to symphonic black metal, to the more primitive occult metal of Beherit. But the finished product is more than the sum of these parts and just as diverse as this description suggests. But limitations in production values, whether it’s the deliberate buzzsaw tone to the bass guitar or the hammy orchestra-hit tone on their keyboard, lend a humorous charm to this music. This, for my money, adds another layer of intrigue to this already intriguing album.

Tokyo’s Sigh are perhaps even more infamous for twisting the idea of what extreme could and should be, even as early as 1995. Formed back in 1990, they gained an underground following in Europe thanks to the backing of Euronymous and his ‘Deathlike Silence’ label. After invoking an older school of black metal in Bathory and Hellhammer it became apparent that their sound was going to develop into something weirder by the time ‘Infidel Art’ was released in 1995.

What makes this so odd is the seamless combination of two diametrically opposed approaches to black metal. One is the graceful symphonic angle. In Sigh’s case this was masterminded by frontman and classically trained pianist Mirai Kawashima, who offers up rich layers of keyboards, piano leads, and even epic progressive passages calling to mind King Crimson as much as they do anything remotely metallic. This is offset by primitive, old-school black metal riffage straight out of the book of Hellhammer; that includes aping their trailblazing exercises in death/doom.

In a sense then, this is what Celtic Frost’s ‘Into Pandemonium’ (1987) could have been. Because hot mess though that album was, mixing primitive extreme metal with the more flamboyant excesses of progressive rock was an interesting approach to take. Where Celtic Frost failed, Sigh succeeded. And as with Necromantia, they did so with limited means. The production is a little flat, the drums are devoid of any adornments in production, guitars are heavily distorted and thin, vocals are a harsh and primal rasp. But this is combined with some bizarre tonal choices from the keys and genuinely pretty melodies. It’s almost funny as well as musically engaging. I believe that amounts to something called charm. In less competent hands this could have turned into an irritating clusterfuck of wackiness for the sake of it. And truth be told, it shouldn’t work. But so skilled is this incarnation of Sigh at building a composition with purpose and musical reward that they have pulled off what few else could.

So here we have it; two albums from less celebrated black metal scenes, that are really only black metal in the broadest possible sense, that both combine the basic primal elements of 80s extreme metal with unconventional techniques and instrumentation. This is a recipe for a pretentious failure. But neither artist let the desire to be different for the sake it define their sound, and they put these surface level flourishes to the service of a greater cause, which is bizarrely well crafted music. So both are winners in my eyes. But I feel that Sigh pulled it off just a little bit more convincingly (and unconventionally for that matter). This in large part is thanks to band leader Mirai Kawashima and his seemingly bottomless well of creativity when it comes to tickling the synthetic ivories.