Of all the subgenres of metal, stoner doom is the most direct descendant of Black Sabbath. Therefore it is both the oldest form of metal going, yet somehow the most modern. It’s just catnip for psychedelia revivalists; exuding more subtle cool than its dorky cousins. Metalheads of all stripes will find at least limited value in this style, due in part to its debt to Black Sabbath if nothing else. But its enduring appeal to civilians interests me, civilians who otherwise wouldn’t touch most metal with a barge pole.

Twas not always so. Saint Vitus’ anthem to alienation ‘Born Too Late’ (1986) is a testament to how unpopular this music was in the age of Slayer. After a brief resurgence in the early 1990s stoner doom was again swept into obscurity by the nu-metal and alt-rock boom of that decade. In the connected modern age it all but exploded as the acceptable brand of metal that civilians could listen to without embarrassment. It may not have been as commercially viable as some forms of metal, but it definitely ticked many boxes for people that wear music on their skin rather than their soul. Recently it has run out of steam somewhat, weighed down by its own limited formulas. Much like punk, it is easy to play, much harder to make interesting in an age of saturation. But the best this style has to offer still holds water for metalheads the world over, and with good reason.

After some false starts in the late 1990s, Tokyo’s Church of Misery finally got going at the dawn of the new millennium, channelling the new age of morbidity and paranoia that followed 11/09/2001. The backdrop of the war on terror seemed fitting for CoM’s lyrical obsession with serial killers, the West’s very own home grown terror. Their second offering, 2005’s ‘The Second Coming’, is the most realised iteration of their overstated take on doom metal. And overstated really is the word here. Doom metal, and particularly stoner/doom metal, is no stranger to energetic aggression as well as slow, droning guitars that make up its usual calling cards.

Church of Misery build their music from the drums up, which are relentlessly energetic but nevertheless restrain the rest of the music, pinning it down to recognisable grooves and blues rhythms. From this the bass and guitars work their way through heavy blues scales and chaotic stoner riffs. Fittingly, the vocals are deranged. There seems to be some semblance of singing to a tune lost beneath the din, but a casual listen will simply reveal distorted growls from the back of the throat, with just enough humanity left in them to hit the occasional note. But they swing so wildly from one end of the range to the other that they do nothing to ground this abrasive music.

Which brings me back to the point that the drums are the only thing grounding the structure. They are busy and frantic certainly, but they provide the only anchor for the listener to contextualise this as groovy heavy rock. The riffs simply come too thick and fast to process on first listen. Imagine Blue Cheer, but just way more Blue Cheer, so much Blue Cheer that the brain just cannot process how much Blue Cheer there is. If Blue Cheer was a slice of cake, then ‘The Second Coming’ would be a flaming ten tiered rum drenched wedding cake monolith.

At the other end of the scale is Acid King, the brainchild of one Lori Steinburg, formed in 1993 in San Francisco when she relocated there from Chicago. Their debut, 1995’s ‘Zoroaster’, boasted a classy mix of roadhouse rock and elegant stoner doom that is well worth visiting. Follow up ‘Busse Woods’ (1999) took the doom elements of the debut and put them front and centre. The result was a much bleaker affair, an empty, cavernous album of either boredom or atmosphere depending on what you’re expecting. After a period of silence we were treated to the creatively titled ‘III’ (2005), which seemed to attempt a further unpacking of the more atmospheric side to Acid King’s brand of stoner doom, albeit with more  activity from the rhythm section.

There is much potential in this music, and for that reason I find it all the more frustrating when it goes unrealised. They can maintain momentum as long as a fantastic opening number, a slightly lukewarm follow up, only to end on a selection of filler tracks. Although this may depend on how you define filler, because Acid King’s music seems to rely on atmosphere and mood more than riffs. Sluggish guitars will work their way through standard droning riffs, with the bass providing much of the pacing and drive behind this music, leaving the drums to follow the bass as chief rhythm keeper. When you look at the fact that beyond basic, slow, rock rhythms, the drums are a wash of symbols and fills, it really seems they are there more to provide timbre than to keep time. This approach is similar to the percussive work on Sleep’s ‘Dopesmoker’ (2003). The exact opposite to Church of Misery’s approach. 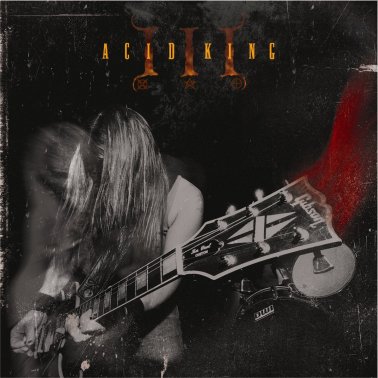 Add to that Lori’s soaring clean vocals, laced with cavernous reverb and set distantly in the mix, and this really comes across as ambient stoner doom as much as it does a heavy rock album. There are guitar leads and even solos at times, reminiscent of Kyuss in both style and guitar tone. But they tend to be repeated ad infinitum to the point that one cannot help but zone out. It should be noted that this is not necessarily a detriment to the music. It just means that its appeal is more found in atmosphere, mood, and tone, than it is ticking the heavy rock boxes of powerful riffs and big choruses. But I do feel that to truly achieve this Acid King needed to get off the fence and fully embrace this more ambient approach. Look to Ufomammut as an example of this sound done right.

So in a sense we have two extremes of the same style with these two releases. ‘The Second Coming’ has taken the bare bones of rock music found on ‘III’ and ELECTRIFIIIIIEEED them. And ‘III’ has taken the slower, doomier passages on ‘The Second Coming’ and streeeeetched them as far as they will go. For that reason some of the appeal of these albums will depend on what you expect on first approaching them. If you expect mellow mood music from Church of Misery you’re gonna have a bad time, and if you expect titanic riffs from Acid King you may be let down.

But from a more objective standpoint I feel that Church of Misery, on ‘The Second Coming’ at least, did a better job of embracing their unique approach to this music full in the face. There is simply no getting away from the fact that they are masterful at throwing riff after riff at the listener to the point where they almost seem to completely lose control of the music, only to pull it back from the brink. I feel Acid King, although expertly piecing their signature guitar and bass tone together with the vocals, and using the drums as an almost ambient instrument, should have simply embraced this darker, brooding approach head on rather than sitting on the fence and retaining the more pedestrian stoner rock elements.

One thought on “A return to an older school: Church of Misery and Acid King”