Does doom exist in pure form? Does it always have to be prefixed with a qualifier: funeral, death, stoner, epic, gothic? Are the differences between Electric Wizard and Esoteric as dramatic as they are between a Panopticon and a Teitanblood? The importance of this question stretches beyond a source of quibbling debate on metal forums. It matters for our understanding of the evolution and future of the style in general. Is it simply something that happens ‘to’ other genres, a colour scheme applied to a pre-set design? Despite the fact that a lot of metal bands self-identify as doom, the word does not have the same descriptive power as other subgenres. Without additional information one is never sure if one is going to be treated to power metal in a glacier or a cacophony of abyssal static. Here’s two prime examples of what I’m on about.

Bradford’s Monolith Cult were a classic example of the epic doom variety. Their second (and sadly last) LP ‘The Gospel of Despair’ released in 2017 saw them tighten up their sound into a streamlined battering ram of meaty yet melodic riffs straight from the book of Candlemass. But what made Monolith Cult stand apart from many Candlemass clones was a drive and bounce to the rhythms that gave the music more momentum. The sluggish, glacial musical developments is something many newcomers to any form of doom find off putting. Monolith Cult make do with not being the slowest out there, sticking to more of a marching tempo for long stretches of this album.

The production is sensitive to this aspect of their sound. The guitar tone is fat but sharp enough to carry some of the more intricate lead melodies that contribute to their approach to building narratives. Many of them have an almost folky twang to them. One can envisage them played at twice the tempo on a fiddle and they suddenly sound almost jolly. They are, however, married with many chugging, more basic riffs made up of power chords bolstered by pounding drums. Speaking of which, the drum sound, much like the guitars, has enough impact to do justice to the traditional heavy qualities to this music without overpowering the sound in the faster passages of this album. Vocals are straight from the book of classic heavy metal. They soar above the riffs with that intense, metal crooning style that some find so overbearing. And it cannot be denied that there is no let up in their intensity. Sure, they are strong, melodic, and fully showcase Bryan Outlaw’s vocal range, but there is no soft touch to them. Now, for the purpose of ‘The Gospel of Despair’ that may not be a problem. But at times it becomes overbearing. Especially when he follows the guitar melodies and things become clunky. His voice has such a presence that it works best when set to more basic guitar lines and its free to pick out its own melody.

Monolith Cult have worked enough variation and imagination into these tracks to the point where overly extended solos are not necessary. This definitely fits within the catalogue of epic doom, but most of the tracks feel pretty tight and punchy, none of them overstay their welcome, and most offer a fine balance between melody, heaviness, and rhythmic bounce to make the overly laboured trappings of epic music surplus to requirements.

America’s Churchburn are an odd one in that they take what is prima facie a pretty generic style – a combination of doom, death, sludge, and heavy metal – and mash it up into a finished work that succeeds where so many others have failed. At least that’s the case on their second LP ‘None Shall Live…the Hymns of Misery’. The production augments that oppressive quality to the guitars, and the drums sound organic yet cavernous, with an underlying, throbbing bass tone to the whole thing. But by the first few opening chords one can’t help but observe how often they have heard this before, and how boring it becomes by the end of the first track with zero variation. Anyone can combine watered down Autopsy riffs with sludge metal stylings and throw out album after album with little to recommend it. 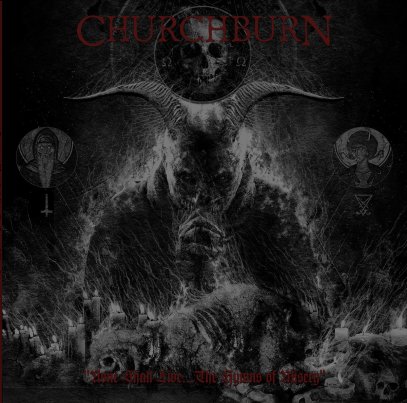 But as the show gains momentum on ‘None Shall Live…the Hymns of Misery’ Churchburn reveal that they are up to something a little more sophisticated than this. Sure the riffs are basic as fuck, but it quickly becomes apparent that many of them are just link riffs, bulldozing the momentum of the music forward before the next connecting refrain, the next driving tempo. They can break out into a laboured flourish with a surprisingly nuanced sense of melody that is granted extra impact by the fact that it’s sandwiched between such oppressive sections of outrageously simple chugging in 4/4 time.

This is all the more impressive given that Churchburn opt for a fairly typical vocal style as far as sludge metal goes; sticking within a hardcore punk framework of grating aggression as opposed to anything remotely musical. This blocks one possible route out of the abrasive monotony that is a lot of modern sludge. But in putting the usual (and all too dull) trappings of sludge metal in service of fully realised narratives and structures found in more sophisticated metal subgenres makes this album immediately stand out. I would hesitate to call this death doom. Churchburn’s style still leans too heavily towards sludge for it to move into death metal territory proper. But there is certainly enough complexity to Churchburn’s approach to chord progressions that amounts to an odd hybrid of the ultra-basic set against a surprisingly accessible approach to guitar leads that is closer to classic heavy metal than anything else.

An odd hybrid is really what we must call this. It contains many features from doom stylings that I generally find tedious, and that’s still the case when they crop up on ‘None Shall Live…the Hymns of Misery’, but one has to admire how they are used to provide contrast and variation on here, as opposed to being the sole focus to the album. For that reason Churchburn avoid the usual trappings of monotony and tedium that many of their contemporaries fall into. They have produced a work that over the course of its runtime graduates very much into the lexicon of epic heavy metal.

It would be unfair to say that both these albums are simply slower versions of other metal styles. Whether it’s classic heavy metal or death metal, there is more going on within the tradition of doom that informs both the structure and aesthetic that both these artists are going for. Even at the most superficial level one could say they have a depressive strain running throughout that influences their overall outlook. But they both demonstrate an important point often missed by a lot of doom metal bands of any stripe. And that’s the simple fact that ‘doom’ is something that informs their approach to metal, but it doesn’t determine it. They already have fully fleshed out styles and a signature approach to forming a piece of music. This is then enhanced and complimented by a depressive, slow, and lethargically heavy approach that binds this pre-existing framework together. In terms of the pick of the week, it has to be Churchburn, simply because the audacity of their approach is admirable, and even more so for the fact that they actually pulled it off. But for fans of epic doom metal ‘Gospel of Despair’ is highly recommended, but it may be a little abrasive and overbearing for people new to the constant melodrama and intensity of this style. It’s not for everyone.

One thought on “Despair and entrenchment: Monolith Cult and Churchburn”