At its most fundamental level, music is a form of pre-verbal communication. Compared to the precision of language it is clumsy and open to multiple interpretations, but in its rightful domain of emotional and instinctive expression words do not compare. Throughout most of history, it was something that everyone could engage with, both as musician and listener. With the formalisation of western music during the Renaissance  the maestro was born, and music became a spectator sport. People would watch professional musicians write and perform ever more complex pieces. Some composers were able to blend this with music of universal human appeal, using their mastery of music theory to the end of art. Others, although technically proficient, never moved beyond an impressive display of finger exercises. The rise pop music in the 20th century only exacerbated the idea that musicians existed on stage; playing and writing music was an exclusive pursuit. Only recently has this trend started to decline with the direct communication between fan and artist facilitated by the internet (the full repercussions of this may be a discussion for another day however).

These two artists have produced work that is pleasing, well executed, and more or less original. BUT, I cannot help but think that the cart has come before the horse. It is so stylised, so focused on a specific aesthetic or theme, that it almost feels like it was generated by algorithms and not artistic compulsion. Cruel as this assessment may be, they are nevertheless noteworthy pieces of music that I find myself drawn to.

In my head I already call Glasgow’s Saor the ‘Scottish Winterfylleth’, but that’s not entirely fair. Although the soothing wash of blast-beats and melodic, layered guitars that is 2016’s LP ‘Guardians’ is similar, Saor definitely indulge in major keys a bit more, and have opted for fiddles and bagpipes to compliment this pleasing shower of noise. The production is so perfect that there’s literally nothing one can say about it, at least nothing interesting beyond ‘it’s all there’. Guitars are a barrage of tremolo picking, pleasing folk melodies and licks, which occasionally draw back to synch up with the double-bass rhythms. Vocals operate at a deeper level than is typical for black metal, with more of a death growl reminiscent of Hate Forest.

The trance-like nature of this music allows Saor to repeat the same refrains again and again without risk of tedium, with variations to the rhythm and tempo allowing this to extend even further. They will then layer this with flutes, fiddles, or bagpipes as and when they choose to drag these passages out even further. 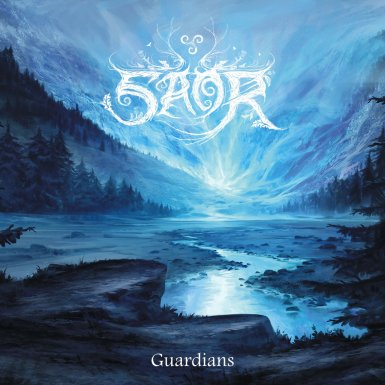 A typical track will open with a simple refrain before the actual metal section gets going. Once we have been treated to some blasting, melodic metal a breakdown will usually follow, with pretty folk leads taking charge. This also allows the drums some creative space to add greater complexity within each drum loop without fear of being drowned out by the guitars. The metal instruments will then take up the melody from there, as a simple re-iteration of what has gone before. We can hardly say that this is a call-back as it occurs immediately after what is being called back to. But, they do work each refrain through several iterations, utilising everything to stretch out the idea for as long as possible.

In this sense what is superficially very rich music with many complementary paths operating in tangent, is actually really rather simple at a structural level. Hence the charge of sonic wallpaper. Inoffensive enough to cover your walls with (or to extend the analogy, listen to repeatedly), and replete with small intricacies and flourishes, but essentially a repetition of the same patterns over and over again.

Minneapolis is not what springs to mind when one thinks of melodic, medieval, folk/black metal. Yet here they are, Obsequiae, going round releasing music like it’s all fine. Their second full-length offering, ‘Aria of Vernal Tombs’ (2015) is a highly polished and competent attempt to marry traditional medieval rhythms and melodies to conventional rock instrumentation. Aside from the odd harp interlude, it is noteworthy that AOVT is largely an album of guitars, bass, and drums.

Instead of playing a particular stripe of metal, and adding fiddles and flutes over the top and calling it ‘folk metal’, Obsequiae have actually lifted traditional medieval rhythms and melodies and applied them to the guitar and drum setup. Although this has been done before, most notably with Summoning, Obsequiae have carried this a step further, and have clearly taken their role as musical historians to heart in the process.

The result is a bizarre exercise in not just melodic metal but metal’s history as well. For instance, if at times the guitar licks are reminiscent of power metal it is because power metal often borrowed from the same pool of influences. In delving into history, we learn more about the techniques metal used to transcend its blues and jazz routes. It is powerful and uplifting metal, that offers an array of interweaving melodies and rhythms for the avid listener. So refined is the sense of melody that if it weren’t for the vocals I would question whether we could even call this black metal. 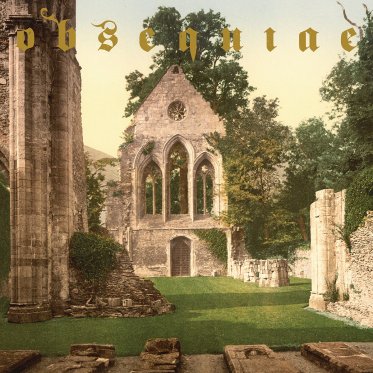 It’s an idea I have laboured on when it comes to this neofolk black metal wave that Summoning inspired. The music is so melodic and atmospheric that one wonders whether something as aggressive and unrefined as the traditional black metal screech is even appropriate, even when covered with vocal effects. The music on ‘Aria of Vernal Tombs’ is complex enough to be instrumental, so why continue to marry it to a black metal aesthetic at all? Even if at one point in the dark past that’s where its routes lay.

Whilst overall AOVT is a pleasing listen, I cannot help but wonder how much heart has gone into it. It is so stylised, so focused on creating this reimaging of metal exclusively through the lens of the past, despite using plenty of modern techniques (not least the instruments themselves), that the spectre of shallow novelty looms.

I won’t labour this point too much as this is a very well-made LP that remains in my regular rotation, but there is such a thing as overly stylising the lily. Whilst it’s true one cannot simply wake up one morning and write music without first deciding what instruments to use, and what techniques to practice, these in turn will go some way to defining your ‘genre’ for want of a better word. However, the other side of this coin is setting everything up down to the intricacies of the theory behind your chosen style, and then proceeding to write within these self-imposed limitations. The obvious risk being that the end result is a flawlessly executed product devoid of spontaneity and freedom.

Both this week’s offerings run that gauntlet between boredom with just enough heart to elevate them above similar examples of this style. When all is said and done I believe the issue with them is not so much a lack of originality but a lack of danger. They are both composed and delivered by highly competent musicians, but the risk (and therefore the risk of failure) that makes great music great is lacking. There is no freedom and no surprise. However, Obsequiae remains that bit more intriguing not least because they buck the trend in the realm of folk metal by opting to shelve the keyboards and the flutes and rather transpose folk and medieval melodies onto electric guitars. The backbone of the music itself is written in these historic styles, unlike an Eluveitie who just spew out pop rock accompanied by a folk ensemble and call it a genre.