Here’s two buried classics of a time gone by. A reminder that with enough enthusiasm and creative energy, sloppy execution can sometimes be a virtue in death metal. This music is granted additional charm the swampy, lo-fi aesthetics of many underground demos and EPs floating around in the early 1990s, beneath the radar of the Scott Burns or Sunlight Studios crowd.

Lord of Putrefaction are initially of note for being the origin story of Jus Oborn of Electric Wizard fame. But their first EP, ‘Wings Over a Black Funeral’ (1991) is far closer to Autopsy in execution than anything remotely stoner. Even at this early stage, Oborn had a knack for squeezing every possible ounce out of even the most basic riffs. He does this by layering them with atmosphere which extends their appeal well beyond their actual substance. Although the music is largely constructed of primitive death metal along the lines of Celtic Frost and Autopsy, there is a darker atmosphere running through this music akin to the 70s horror films that Oborn is so passionate about. 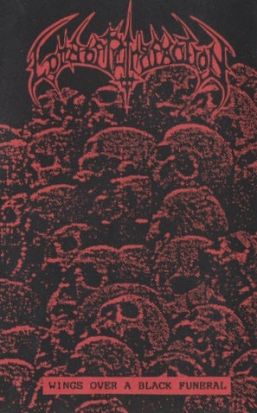 There is also an undeniable groove to the rhythm section which is rather novel for primitive death metal. By groove I do not mean Pantera style disco floor fillers, but a more subtle drive and intent to the rhythmic underpinning, which when layered with the haunting and fuzzy oppression of the simple, chugging, riffs lends it a sludgy energy all of its own. Vocals – which are sometimes reminiscent of Scott Carlson – compliment this juxtaposition of relatively slow yet energetic death metal.

There is also a pronounced goregrind influence at work here, especially within the vocals, which sometimes descend into the gargling of Ken Owen on ‘Symphonies of Sickness’. Indeed, so basic and primitive is some of this music that it is almost akin to grindcore played at a third of the tempo. Structurally it does not operate like death metal, rather presenting the listener with a series of deconstructed ideas, the hints of conventional music, beneath a wash of distortion and aggression. Whilst more work would be needed to stretch this material into a full length release, this hyper primitive and ‘evil’ mutation of conventional musical forms lends itself to the short form narrative of an EP. Quality old school death metal with an appeal that should stretch well beyond Electric Wizard fans.

Texans Divine Eve are another veteran of the old school that never really made it off the ground. Their debut EP ‘As the Angels Weep’ may have been released in 1993, but it sounds like it belongs to the previous decade. Celtic Frost is the clear influence here, with primitive but playful powerchord riffs that seem to have their hearts in doom metal, but their minds in death metal. By that I simply mean that many of the riffs have a fun quality to them that would be at home on a more bluesy unit such as Cathedral, with the meaty guitar tone to match, but the music itself switches from hyper simple punk and d-beat tempos with the aggression to match, worked together with that aforementioned playfulness of older doom metal. 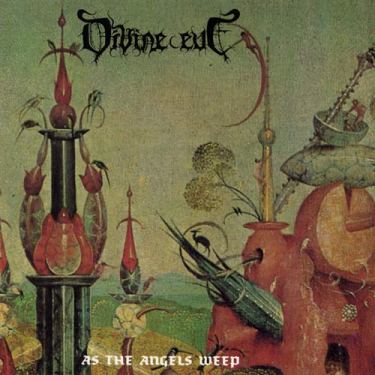 Although barely a quarter of an hour in runtime, ‘As the Angels Weep’ is a mixed bag of derivative but highly competent punky death metal mixed in with some genuinely novel doom metal riffs that showcase the germinal of something more. A combining of the simple building blocks of death metal with the more epic potentials of doom metal, something that Asphyx were excelling at during this era as well.

Although this release is hardly bursting with novelties, it does offer an interesting study in how the melding of two opposing schools of thought within metal of the 1980s was achieved. One was the aggressive and simple extreme metal that grew out of hardcore punk, and the other was the epic and esoteric form exhibited by classic heavy metal. Although thrash metal is defined by this melding, ATAW in all its simplicity takes this approach a step further. The faster passages are even more sloppy and primitive than old school thrash, and there are hints of the longform doom epics of a Candlemass. However, this is one of those rare occasions where I would make an argument for a longer runtime, simply because the more drawn out doom metal that Divine Eve are aspiring to requires more time for the ideas to fully develop. But if we look at in microcosm, as a series of examples from each style and how they might be blended into something new within death metal, then ATAW weep remains a curiosity nonetheless.

In a sense both these EPs have two things in common. One is the obvious stylistic similarities. Another is the opportunity they offer in laying bare the components of death metal at this time and how it can be reimagined in new and unique ways. Oborn’s ability to create dread and unease from relatively repetitive and simple building blocks is apparent even on the early works of Lord of Putrefaction. Divine Eve exhibit the marriage of two well established philosophies in metal in 1993 – the epic and the primitive – and further offer hints at how to blend them together under a unified work. However, the immediate impact upon the listener, the novelty, the more instantly recognisable style, all point to me picking ‘Wings Over a Black Funeral’ this week.

One thought on “Our nightmares: Lord of Putrefaction and Divine Eve”