In underground black metal, there are two kinds of people. The reclusive hermit that just wants to hide away from the world and wait for humanity to burn itself out. And the soldier of the revolution who wants to bring about humanity’s destruction as quickly as possible. Ok, maybe there’s three kinds of people if you count the IT support guy. We all know one. He (and it is a he) lives with his parents and releases twenty albums a week from his bedroom. But I digress. Satirising black metal is like shooting fish in a barrel. It’s ridiculous enough without smug brats making banal jokes about it. We get it. It’s silly. This was known long before the well-crafted memes. But a lot of these stereotypes originated from serious beginnings. From genuinely weird dudes at the very peripheries of society.

Sort Vokter is another name given to the collaborative work of Ildjarn and Nidhogg, this time with some helping hands from Tvigygre and Heiinghund. Their sole album, ‘Folkloric Necro Metal’ (1996) is a one-of-a-kind jewel of raw of black metal. It is often said of solo projects that removing the need to compromise with other band members aids the music. Whilst this is true, it’s a double-edged sword. Especially when you’re dealing with the likes of Ildjarn. His insatiable appetite for creating the most unpleasant music possible is infamous. But it is tempered somewhat on this release by the steady hand of Nidhogg. Make no mistake however, this is minimal raw black metal at its finest.

The paradox at the heart of ‘Folkloric Necro Metal’ is how each component part is intentionally synthetic – a drum machine, unreasonably distorted electric guitars, unreasonably distorted bass, cheap keyboards – but the end result is a coldly organic sound, and a uniquely solitary one; it negates any warmth emanating from the company of fellow humans. Keyboards run through elegant minor harmonies atop simple punk rhythms; which are contrasted with the more distinctively ‘Ildjarn’ passages of raw black metal incarnate, complete with inhumanly high-pitched vocals, sometimes despairing, sometimes foreboding. 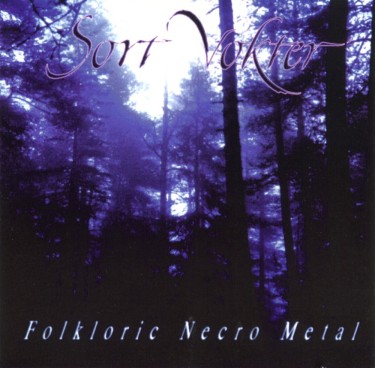 This is broken up by ambient and noise interludes, which occasionally devolve into a single guitar strumming one or two chords. This creates tension, which in turn is relieved by cheap synthesizers working their way through pleasing major arpeggios, bringing with them contentment through solitude. The individual parts really shouldn’t work, but they are so well placed throughout the album that it makes for a truly spellbinding listen.

There are also some clever tricks played in the mixing and mastering of this release. With repetitive guitars switching from one speaker to another, or unexpectedly filling out the sound halfway through a track. This invokes the feeling of being alone in the woods, with sounds from unknown causes being heard from all around, and the disorientation this causes. Given the limited means at their disposal, and the highly aggressive nature of this music; this is a testament to their intuitive understanding of how to translate their love of Norwegian nature into a refined and subtle work of underground metal.

For those who slogged through the tedious read that is ‘Lords of Chaos’, Germany’s Absurd need little introduction. Their bio reads like a Grange Hill story arc from the darkest of timelines. Love affairs with teachers, obsessive fans, mental illness, far right ideology, and murder in the most brutal fashion, it’s all there. Out of this chaos came music that is the very definition of surpassing one’s means. 1996’s ‘Facta Loquuntur’ is a rough and ready collection of recordings from different times and with shifting clientele. It exhibits the perfect marriage of punk, folk, and black metal. It makes for a uniquely charming yet compelling listen and defines this era of Absurd.

At the turn of the century a new line-up took Absurd in a different direction informed heavily by hardcore punk. But sandwiched just between these two eras, is ‘Asgardsrei’ (1999), an EP that closes the chapter on the most controversial and violent incarnation of the band. Many of the tracks here are available in one form or another tacked on various versions of ‘Facta Laquuntur’. However, it is worth tracking down the full release if you can. No easy task these days seeing as this and most of the early Absurd discography have been banned by the German authorities.

This is a foot stomping, militaristic half hours’ worth of raw and primitive black metal. It presents itself as punk music, but many of the riffs and guitar leads take their cues from simple folk refrains, often adapted into minor keys, which adds to the sheer sinister, warlike spirit of this music. On paper, it looks like pop; it’s simple but not simplistic, the melodies transmit easily; all this fits with the spirit of this EP as a call to arms, a rousing declaration of war.

Vocals follow similar patterns to the music, being part aggressive part melodic. But again, although the ideas may have been beyond the ability to execute them, this does not diminish the impact of the finished product. It lends it an intangible DIY charm, unfettered by any of the conventions demanded of more decorous modern output. This is underground metal of old, out in the wild, before the great taming of the web 2.0.

Although many may prefer the more varied and restrained ‘Facta Laqontor’, there is a chillingly primal heart to this release that is simply infectious. Add to this the ‘Conan the Barbarian’ inspired intro, which even Rob Darken would be proud of, and you have the makings of a gem of extreme metal at its most unacceptable to polite ears and minds.

So should underground black metal follow the way of the warrior or the sage? Should we retreat into nature and watch society’s decline from afar? Or should insert ourselves into the hearts and minds of the people and welcome the end with open arms? Well neither, but if you want some intense yet mature music then both these releases come highly recommended. ‘Folkloric Necro Metal’ however is my pick of the week; and it’s really all about the numbers this time. Sort Vokter just tick more boxes in terms of style, musicality, production, and mood. ‘Asgardsrei’, whilst a fantastic and oft overlooked Absurd EP, does one emotion, albeit very well. But one must be in the mood. FNM on the other hand – for an album that looks like it was simple to piece together – offers a new intrigue with each listen, no matter how many times it’s spun.