Here we have two artists that took the basic building blocks of primitive extreme metal as it was in the early 1990s, and produced music not of this earth. Black metal of this era will forever be mired in the actions and words of individuals within the scene. I’ll be dealing with none of that here. If there are as many interpretations of art as there are consumers of art then so be it, even if some of the interpretations are straight up wrong.
Beherit, the mastermind of one Nuclear Holocausto Vengeance, was largely distanced from the noise coming from down south in Norway.

Fully committed to Finland’s legacy of producing uniquely weird extreme metal artists, their first full length ‘Drawing Down the Moon’ released in 1993 is a testament to the importance of the right kind of lo-fi production values. I call this his first full length as ‘The Oath of Black Blood’ released in 1991 was really a collection of demos (half an hour of unbearable noise). Entry level discussions usually mention that while the early works of Bathory were poorly produced by necessity, many of the foundational works in the second wave of black metal were poorly produced by choice. Such an analysis is accurate enough. But it misses the real import of this. Foundational second wave black metal is as much about the experience as it is about composition. If you lift the riffs of Darkthrone’s ‘Transylvanian Hunger’ out of their raw black metal context, they may come across as bland; see Gorgoroth’s higher fidelity cover of ‘Slottet i det fjerne’. Unless particular attention is taken to reproduce this experience, it will not translate live. More riff based black metal in the vain of Rotting Christ suffers less from this issue, but the atmosphere is sometimes sacrificed on their recorded works as a result. 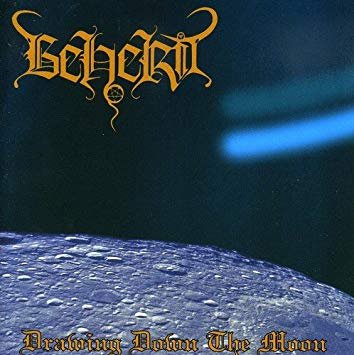 It is for this reason that Beherit’s ‘Drawing Down the Moon’ is such a curiosity. The riffs feel familiar. Many are of the standard dark thrash fair that made up black metal of the late 1980s. Beherit is the direct descendant of Sarcofago and Blasphemy, sure there’s harmony and even melody at play, but primitive powerchord riffs make up the bulk of this music. But the guitars are recorded in such a way as to make them sound distant, understated, like a menace heard a few miles yonder, into the forest. The music itself should be aggressive, but because the elements that would usually make this sound aggressive (vocals and guitars) are so supressed in the mix, it is more a chronically haunted dream than a punch in the face. The vocals are ghoulish, a mid-range rasp that are mixed in such a way as to sound like a hoarse whisper. The music permeates through every pore from a great distance.

Drums tap along in the background, ranging from a slow blast beat to simple 4/4 rhythms; their purpose is simply providing texture, occasional urgency, and a familiar anchor for this otherworldly music. There is no doubt that this album was designed to be listened to at night. In different hands it could have sounded aggressive. But in these hands it is ritualistic, dark, atmospheric, like an extreme metal band playing dark ambient. The ‘metal’ passages are occasionally broken up by simple harmonies, dark ambience, and spoken word passages. Beherit were something of a black sheep within black metal. They were both a throwback to its primitive beginnings in the 1980s, but also a uniquely alien and atmospheric take on music that already boasted its fair share of these elements. Follow up albums would shift to ambient and electronic music for want of a band, but the talent for creating bizarre music from the depths of humanity’s unconscious dream-states would not be lost.

If you have come this far you have a probably heard of Burzum, the brainchild of Varg Vikernes. He killed a guy and burnt down some churches. He also released three successive foundational black metal works in as many years, and a variety of follow ups both in and out of prison, the significance of which is still hotly debated today. ‘Hvis lyset tar oss’ is the third of Burzum’s black metal trilogy released in 1994, and demonstrates an unprecedented degree of musical growth from the self titled debut released just two years prior. From capable and energetic raw black metal packed with simple, haunting riffs, we now have just four tracks averaging ten minutes in length, each repetitive, yet expansive, unfolding musical ideas, building and releasing tension, telling a story with patience and grace. 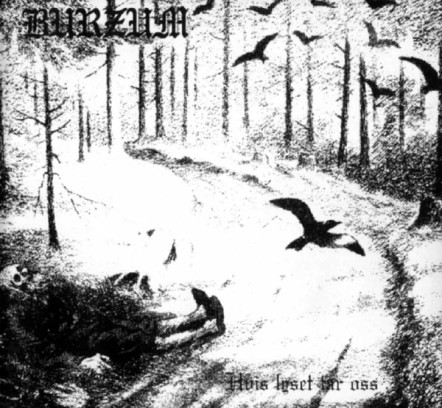 Production has come a long way as well. From selecting the tinniest practice amp available for ‘Burzum’, and a headset microphone, we now have drums laced with reverb, additional layers of guitars, subtle keyboards adding texture and depth, and less overbearing vocals. Varg has since denounced the way his voice sounded on the first few Burzum releases. And it really does take some getting used to, even in the context of black metal; it sounds akin to someone stepping on lego whilst receiving an electric shock. However, once the spectre of comedy fades I have always found something inhumanly despairing about this high pitched wail. And on HLTO its more jarring effects are restrained by more intelligent mixing, additional reverb, and scant use.

These four tracks function as one extended piece of music. Whilst previous offering ‘Det som engang var’ released in 1993 hinted at this style of composition, it is disjointed in places by comparison. HLTO begins with the introduction of themes. As the drums kick in and a trancelike rhythm takes form the theme is consolidated into a simple refrain. After various builds and variations a mini finale is resolved. The second piece picks up from this, increases the tension with a simple two chord riff that goes through a number of transformations over the course of its seven minute runtime, switching from blastbeats to a simple 4/4 pattern. This then concludes without warning, only for the third piece to begin and pick the intensity even further with an even simpler two note riff, again, accompanied by blastbeats. Dissonance and aggression take hold, only for it all to break down in the climax. The synth and guitar call-back to the opening of the album played with more urgency than before, with new understanding. A simple lead picks up the burden of musical development, before again a resolution is reached with little warning.

The piece is concluded with the synths taking over for the last quarter of the album. An extended ambient track leads us through various simple arpeggios, and then a final repeated refrain guides us to catharsis. At the time it was the most patient and mature statement of extreme metal and has arguably never been bettered. The career of Burzum has been overshadowed by almost never ending controversy, if not for individual acts then ridiculous public pronouncements, which has led many metal fans to give up on Burzum regardless. Varg Vikernes remains the personification of that irritable contradiction at the heart of alternative music. For if music is to be truly alternative , truly underground, it cannot be comfortably tolerated by the societal norms that surround it. To be truly counter, one must be the embodiment of everything unacceptable to polite society. And this goes beyond thuggish racism, to the core of Varg’s rejection of the society he found himself in.

Immature, struggling for clarity maybe, his music became the voice of a truth he could never articulate through the spoken word. ‘Drawing Down the Moon’ is a ground-breaking work of black metal, but this week I decided to write a bit about Burzum’s HLTO, and Beherit’s seminal work drew the short straw and had to be compared to it, which meant it would lose. But seeing as any album would lose in my eyes it really is a pointless exercise choosing an album this week.