Primitive death metal’s ability to constantly re-invent itself within such simplistic parameters really is remarkable. By the early 1990s death metal was in danger of stagnating on all fronts. But despite the risks, there were those that insisted on carrying the flame for simple music that avoided the pitfalls of being simplistic. Two releases by two giants of the trans-Atlantic scene, Obituary and Entombed, both well established acts by this point, are shining examples of how to stay fresh within this arguably limited remit.

Entombed require no introduction from one such as myself. Spawned from a chunk of old school death metallers Nihilist, their debut ‘Left hand Path’ took the world by storm and put the Swedish scene on the map, along with the likes of Dismember and At the Gates. As a result, ‘Clandestine’, following a mere year after in 1991 often gets overlooked. But in truth the measurement one uses determines which album could be considered the superior release. LHP is genre defining, but ‘Clandestine’ is the more varied and arguably more mature release.

Off the bat it is necessary to talk of vocals. For this release, L-G Petrov was to take a brief step down from the mic leaving drummer Nicke Anderson to stand in for him, and unexpectedly gave one of the most memorable performances in death metal. His voice ranges from a standard guttural growl to outlandish banshee shrieks, which are at once aggressive, emotionally charged, haunting wails of existential despair. These serve to punctuate the music not just through unadulterated passion but by a subtle degree of rhythmic discipline which is essential if death metal vocals (which are pretty much not even attempting to hit any notes to speak of) are to carry any artistic weight. 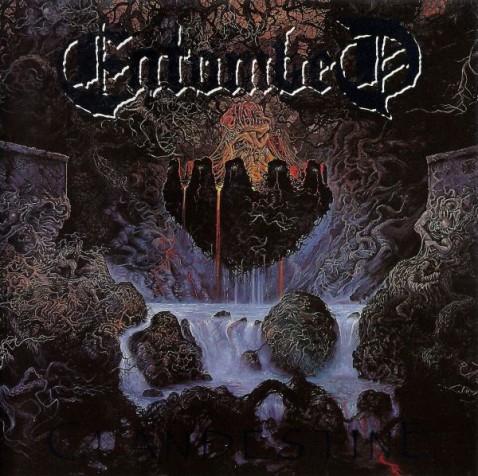 Onto the music, which for Entombed is relatively straight forward yet genre defining. Swedish death metal takes its cues from the likes of Discharge and Motorhead more than it does thrash metal. It seems to bypass this evolutionary stepping stone, and add a level of aggression and depth to music over a decade older than classics such as ‘Clandestine’. The buzzsaw guitar tone is again exemplified here, and as a result playing anything remotely technical would lead to a jumbled mess. Instead we are treated to infectiously aggressive grooves, music which leans toward the mid-pace rather than out of control speed or extended doom passages. But whilst the term groovy may lead one to believe the music is accessible this is anything but the case. For its relatively simply components, all the elements of the music combine to create a haunting trip for a joyless nightmare of insanity.

So much for one of Europe’s contributions to traditional death metal of the era, what of the US? For straight up meat and two veg death metal one need look no further than Florida’s Obituary. Another graduate of Morrisound studios, their second offering ‘Cause of Death’ circa 1990 is perhaps the definitive example of a Scott Burns mix. Muddy as hell, liberal reverb on the snare, and enough clarity in the guitar solos to satisfy the most discerning of virtuosos.

For the musicians themselves, ‘Cause of Death’ was to prove to be a massive step in maturity when compared to their debut of the previous year, ‘Slowly We Rot’. Guitarist James Murphy was choppered in from a small band known as Death and somewhat made his influence known through some now legendary solos put to this record. Again, this is simple yet not simplistic music. The songs are expansive, the compositions can take well over six or seven minutes to unfold, and they do so with patience. They work with relatively limited tools, simple powerchord riffs, the occasional tritone play, intuitive tempo changes, but it’s not what you got but how you use it that matters, and Obituary take their time in building to a crescendo that once broken simply lets loose on the listener with a cacophony of aggression.

This is the polar opposite to a technical take on the form such as Suffocation or Atheist, and is equally easy to get wrong. With simple music, one must remember to write music engaging enough to hold the listener’s attention, something lacking on Obituary albums released either side of this masterpiece. Aside from composition, the other key element to this is atmosphere, which again ‘Cause of Death’ has in spades. The slower riffs are allowed to breath, with the muddy guitar tone lending depth and menace before a faster passage breaks forth. Solos aid this, and are perfectly pitched in the mix to either sound distant or domineering depending on the requirements of the moment. 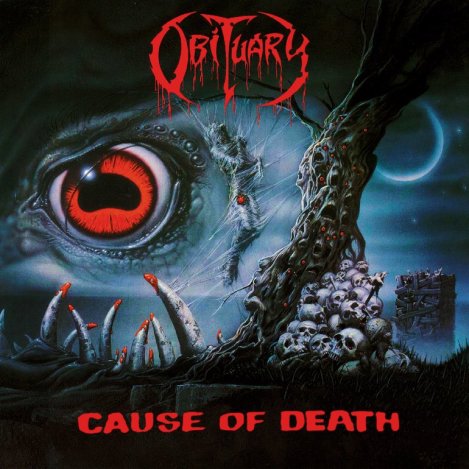 Special mention must once again be made for the vocals. John Tardy’s voice is somewhat the marmite of death metal. His vocals are at the forefront of any Obituary release, so aggressive and manic are they and somewhat hard to describe that one must simply sample and see. He has been known to abandon the idea of lyrics altogether and simply grunt, moan and shout his way through certain passages, but his voice is such that a complete loss of control often seems rather fitting.

If you want a straight up approach to death metal that relies on honest composition, a producer who knows his onions, and vocals of an intensity and passion rarely found outside of extreme metal, then look no further than ‘Cause of Death’. Much as it pains me to say, death metal is one of the few things that the US on the whole just does better than Europe, with some notable exceptions however. ‘Clandestine’ is a classic of the form and solidified Entombed’s legacy as giants of the genre, but the more expansive structures that make up Obituary’s offering give it an edge. Each track is a monolith of aggression, power and menace each more imposing than the last. Both these albums however, serve as a reminder that one need not rely on five time signatures a song to create interesting, even ground-breaking music.