The year is 1982. Heavy metal has taken over the world, Iron Maiden are about to blossom into the well-oiled global touring machine we know and love today. The original impetuous of punk may have run out of steam, but the music and ideas have morphed into new and unexpected forms; from post punk, to goth, to hardcore punk to anarcho punk. Underground music has come of age. The counter culture of the 1960s – so easily assimilated into limp radio friendly versions of itself – has run its course. But by the late 1970s real counter culture had morphed itself into shapes that simply could/would not fit into radio friendly holes, contemporary music had become more than the sum of its parts. The essence of real underground music was latching itself onto some serious philosophical undercurrents taking shape, and this essence ran in direct contradiction to anything capable of appearing on Top of the Pops.

With such an ambitious manifesto lighting the way for modern underground music, occasionally the finished product was bound to collapse into accidental comedy.

What links Witchfinder General’s ‘Death Penalty’ with Venom’s ‘Black Metal’? The most important factor for my purposes is that they both turned out to be incredibly influential and much loved to this day, whilst both are striking examples of metal’s comedic disposition. Witchfinder General fell very much into the lineage of NWBHM artists directly descended from Black Sabbath, although with the blues influences all but evaporated. Vocalist Zeeb Parkes even sounds like an Ozzy impersonator at times. ‘Death Penalty’ and its follow up ‘Friends of Hell’ are oft cited for their influence on doom metal to follow, but the tempo of this music rarely drops to the slowest Black Sabbath were capable of. Yet in this “meat-and-potatoes, straight-up-and-down, Beef-Wellington, Don’t-trust-the-Argies, dick-in-the vagina, cheddar-cheese and chicken-tikka-masala” of an album, you can hear riffs that would become staples of slower artists to follow. Indeed, slow the music of Witchfinder General down by 20 odd bpm, and you would get an approximation of much doom metal to follow. 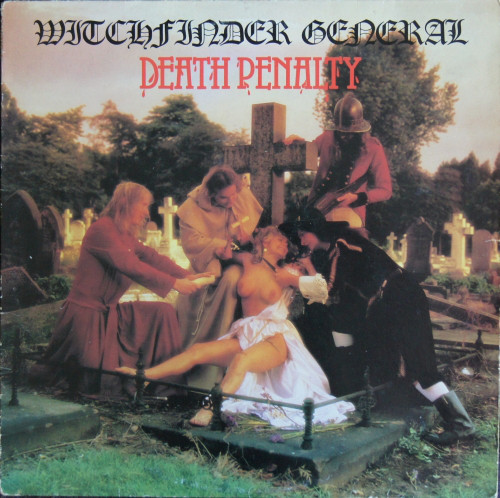 The humour stems first from the cover-art, which drummed up controversy at the time for featuring the band members leering around a topless Joanne Latham, second from lyrical themes that combine abuse and corruption of women with revelry, alcoholism, and the theological paranoia of the witch hunts around the time of the English Civil War. Instead of simply crooning about unrequited love, the woman is typically a witch, and instead of being crooned over as a temptress, she must be burnt at the stake. The simplicity of this approach – combined with very straightforward riffs – almost puts one in mind of modern folk music: catchy, easy to sing along to, easy to play, but also tapping into the everyday problems of everyday people with humour and heart. The fact that opener ‘Invisible Hate’ quickly descends into pining for beer only adds to the compelling amusement one finds in listening to this album.

Venom’s ‘Black Metal’ on the other hand, is an album that needs little introduction. Its actual influence is hotly disputed; some claim that it was no more than a name bequeathed to a most notorious of metal genres that earns this album a place in history, others claim that the level to which Venom explored the occult was unheard of, and early black metal would not have taken shape without it. Whatever the truth of the matter, the results were fucking funny. Tracks swing wildly from high octane Motorhead-esque riffs, backing up guttural vocals that obsess over death, Satan, Hell, and rock ‘n’ roll, or else having sex with teachers. It may have been powerful at the time, but Cronos’ voice is hard to take seriously today, and so over the top and bolshie is the music that it seems to insist upon itself. Whether you love them or loathe them, their mark has been stamped onto most extreme metal to follow. But it took the imagination of a little known Swedish artist to really mutate the direction of this punky, fast-paced heavy metal into something much darker… more alienating. 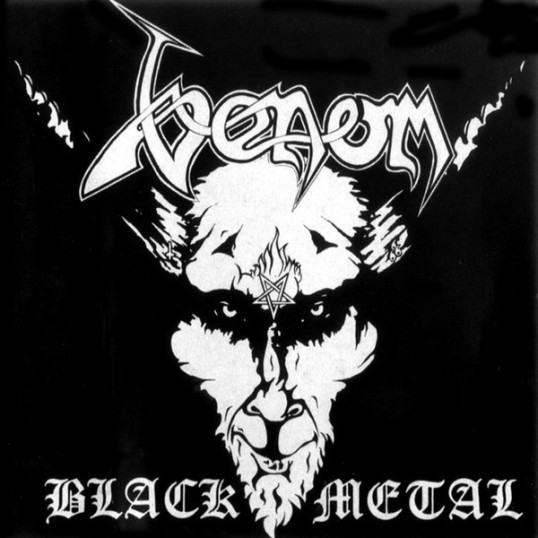 So is there any value to either of these albums today, beyond that which a musical historian may find? Venom remains popular for many reasons, but I wonder how much of this is down to infamy than it is to any inherent quality within the music. This is raw and punky, but not as raw and punky as early Motorhead. This is metal’s first full on indulgence in the occult, sure artists had dabbled before, but Venom embraced it full on. But again, as many before me have pointed out, the effect is comedic, not impressive. But it would be a mistake to call this album overrated, the name alone means it deserves our remembrance, and the amount of criticism levelled at it just about balances out any undue praise lavished upon it. ‘Death Penalty’ may be a more obscure classic, but it is nevertheless much cited by doom metal aficionados. The approach is straight forward much like Venom’s, but the comedy, the controversial cover art, the revelry…it all seems subtly knitted into the music so that even if this is a straight forward, traditional heavy metal affair, even by the standards of 1982, it all works more like a cohesive whole. If ‘Death Penalty’ is sitting in a comfortable corner of the house party, occasionally making jokes and telling funny anecdotes that draw a modest crowd, Venom’s ‘Black Metal’ is stood in the middle of the room yelling at bystanders, spilling beer on the guests, slapping pizza out of people’s hands, and streaking just as the parents unexpectedly arrive home.