The vast majority of extreme metal that leans into the industrial or cyber aesthetic tends to get things horribly backwards. The foundation of the music is usually built on nothing more than the superficial qualities shared by some forms of industrial and some forms of black metal. Any attempt to marry  the two on that basis lacks the requisite groundwork to fashion a complete work of art. Instead of manufacturing a contrived shared aesthetic, a more logical approach would be to embrace the more synthetic qualities already inherent within a lot of extreme metal subgenres and explore their potentials. A noteworthy few have gone in this direction and produced varied yet poignant work from Godflesh to Ildjarn. The artificial nature of this music is apparent even in artists that don’t place this at the front and centre of their sound. And that’s precisely the approach taken on the new album from Austria’s Tristwood: ‘Blackcrowned Majesty’.

They have crafted an idiosyncratic take on blackened grindcore not unlike early Impaled Nazarene – albeit with a more refined approach to longform compositions – fused with components borrowed from Swedish death metal (and elements of the famed buzzsaw guitar tone). They have blended this into a fluid and complex brand of extreme metal that carries both black metal’s ambition and narrative scope, and death metal’s undiluted nihilism. In working this through a very cut and dry approach to rhythm, either blast-beat or straightforward pummelling, they have noted the undeniably synthetic qualities that arise out of this approach to extreme metal. Tristwood then apply a subtle but style-defining industrial aesthetic to augment the mechanical elements already present in their sound. 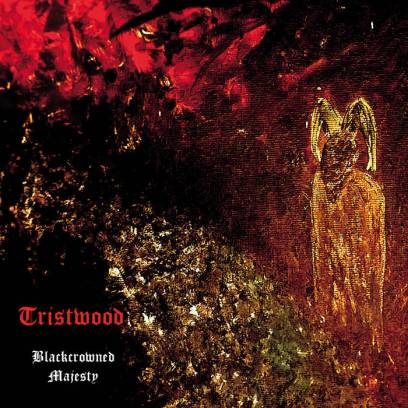 In doing this they have not only transcended mere novelty, they have also refused to allow these surface level adornments to define their sound. Choosing instead to utilise them to enhance a pre-existing and fully realised musical architecture. Although one could say the production is cold and mechanical, it is not outlandishly so in the context of many of Tristwood’s contemporaries (it shares many traits with a lot of war metal coming out recently). But it serves as a groundwork to weave in subtle industrial influences at certain moments that add an extra layer of context and meaning to the drama of this music. The key point here is that this feels like a natural progression for the kind of aggressive yet flowing blackened grindcore that Tristwood are throwing out. The experience is enhanced by the synthetic, electronic qualities of this music. This is in direct contrast to many failed attempts at this; where metal bands have descended into a full on techno breakdown that completely takes one out of the experience and destroys the flow of the album.

Vocals offer a surprising variety of techniques and approaches from the extreme metal lexicon. They offer a robotic, distorted take on guttural grindcore in the tradition of early Napalm Death, with what sounds like some enhancement at the mixing stage to bring  the machine like qualities already present within distorted vocals to the fore. At other times they become more human, referencing hardcore punk. At yet other times they go all out demonic in the tradition of Mika Luttinen of the aforementioned Impaled Nazarene.

Beneath the noise it becomes apparent that Tristwood have mastered the art of allowing the riffs to frame the structure and direction of a track. At times they are the only thing that the listener has to contextualise where they are in the music, as the drums frequently engage in an atmospheric and unsettling array of shifting fills and lightening fast blast-beats that may as well be a simple wash of static noise. The guitars by contrast – although working through plenty of tremolo picked blackened grind riffs – signal rhythm shifts and the larger structure of the music through riffs made up of twisted elements from thrash and death metal. This also lends the music a sense of tension as one becomes transfixed in wondering where the music will go next, what corners it will turn, and how certain progressions will resolve. They use the simplest tricks of pitch, tempo, and rhythm shifts to develop these tracks and drive home the intensity without them ever becoming tiring.

Outside of the heavy pop music that counts for most of the genre’s output, it’s rare to hear a self-proclaimed ‘industrial’ metal band that actually uses these elements in service of their art. Nine times out of ten we are presented with half formed metal tracks that are held back by an overworked cyber aesthetic. But on ‘Blackcrowned Majesty’ we have a work that is fully realised, with undeniable artificial qualities making up the essence of their approach to extreme metal that are further enhanced by these electronic elements. This is intense yet mature blackened grindcore that is fully integrated into the machine.

For anyone remotely interested in the artistic value of Manchester’s Winterfylleth, there was a lot riding on this release. 2018’s ‘The Hallowing of Heirdom’ saw them cash in the black metal and go for full on neofolk. In the world of black metal, when this is not done under a new brand or side project it can be a difficult place to return from. Whatever merit there is in asking them, questions are raised over whether the artist is running out of steam. Have all the ideas dried up? Is there anything left for them to add to black metal? Is the shift in direction a sign of writer’s block? I asked all these questions and more with this release, and fully expected this year’s return to black metal in the form of ‘The Reckoning Dawn’ to be a colour by numbers Winterfylleth album, whose only purpose was to remind us that they existed at all. 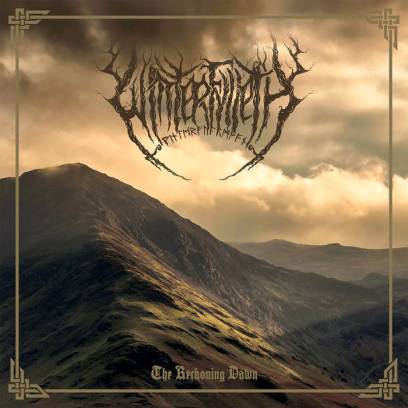 Now let’s be right about this from the get-go: that’s exactly what it is. There is nothing new, original, or surprising about this album for anyone remotely familiar with Winterfylleth and the domesticated brand of black metal they favour. So why the fuck am I enjoying it? The reason is simple yet intangible: the band are having fun with their sound. Having watched their style gradually peak and trough over their first five albums in a clear gradient curve, they nevertheless left in their wake a distinctive ‘Winterfylleth’ approach to the black metal form. Blast-beats streaming by in a soothing wash of sound, like a crisp breeze, pleasing and inoffensive melodies made up of layered tremolo strummed guitars invoking both pathos and sorrow, without overworking the emotive qualities that could have consigned this music to the cheese bin. Elegant folky interludes with clean chanting that build into crescendos make up the dramatic core to many of their albums.

All this is typified on ‘The Reckoning Dawn’. But the difference – once this easily identifiable style has been well and truly solidified – is that Winterfylleth are now masters of it. They know what works and what doesn’t, achieving an engaging yet safe sound comes almost effortlessly to them, and from there comes the very intangible sense that this is a group of musicians simply getting together and enjoying their craft. They have not pressured themselves into innovating, throwing in random exterior influences. This doesn’t sound like an artist going through the motions to throw out a predictable crowd pleaser, although I’m sure the Winterfylleth faithful will be happy with it nevertheless. No, there is an energy to the rhythms, a euphoria to the melodic progressions, and a finesse to the narratives which all give the impression of an artist just taking unadulterated pleasure in their craft.

And sometimes that’s enough. For any band that has its calling cards, that have developed an immediately identifiable style but always struggled to find the next step, the next progression; sometimes it’s enough to simply stop trying and do what you do best. People will criticise it for lack of ambition or originality, and it is true that a truly ground-breaking work would always be favoured over an album that offers more of the same. But given what we know about these guys, and how bad this album could have been as a result, I count it as a triumph.

‘Em Lucefecit’ is the third LP from the long running Portuguese black metal outfit known as Grievance. It’s an interesting marriage that lifts influences from the primordial soup of black metal’s heyday and works a surprisingly sophisticated approach to layered melodies atop this barbaric foundation. This strikes at the core contradiction to the works of early Burzum and Darkthrone, and finds its perfect illustration on ‘Em Lucefecit’. Longform narrative progressions are present but suppressed by the overwhelming impetus toward the primitive. It is at once a rejection of metal that is overly reliant on the conveniences of modernity, and a demand that the intellectual bar be raised in terms of the ambition of the compositions themselves. This is music that looks back to a fictional past, a yearning for transcendental, uncorrupted meaning, in a modern existence defined by the transient and the banal. But this expression is channelled through the products of a modern age, the guitar, the amplifier, recording equipment, and so on. 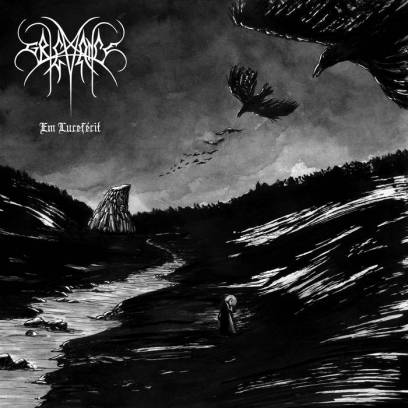 Hence pure black metal’s perverted mastery of this technology into the most deliberately alienating and abrasive of sounds. It despises the very means by which it express itself. This conflict is found at the heart of ‘Em Lucefecit’. It is fundamentally a sophisticated rendering of trance-like, repetitive black metal that is the true heir to Burzum’s ‘Aske’. What at first strikes one as a semi-passable lo-fi black metal offering, gradually unfolds into a complex tapestry of melodies and stories that reveal themselves at an achingly slow but undeniably rewarding pace. Grievance’s approach to layering simple guitar lines in counterpoint, and using this framework to build tension and release as both parts interplay and take turns to dominate the narrative reaches to the true essence of all good black metal. These very common techniques of black metal have found their home here in servicing an artistic expression that is simply not available to other forms of extreme metal. The fluidity and organic essence is formed before our ears.

This harvest, grown from the compost that is the products of a corrupt and artificial modern age, finds its completion in these painfully simple yet intuitive repeated melodies that build the epic narrative arc of this album. This is ultimately what made Burzum’s approach to black metal so innovative. One can spot the similarities and influences he had with other artists of the time, but the finished work seemed to exist in its own universe. The compositions had their own stamp of uniqueness for the simple reason that they did nothing more than tell their own story. ‘Em Lucefefict’ achieves a similar clarity of purpose on this album. The most generic of approaches to the black metal framework is transformed in the right hands into an engaging and purposeful march through repeated refrains that twist and layer on each other, backed by drums that for the most part give the listener a sense of time passing, and only occasionally call attention to themselves with brief fills to add impact at key moments.

The atmosphere and world that this album invites us to inhabit supervenes on these tried and tested building blocks within black metal at its most pure. It’s a reminder of the creative spaces still available to those willing to work at their craft with subtlety and patience, away from the circus and dick swinging of so called experimental or ground-breaking projects that undeservedly dominate the airwaves, and as a result people’s attention.