If Europe is the laboratory of death metal, where readymade specimens are taken in for testing, improvement, or unfortunate mutation, then the U.S. is definitely the engine room. Sure, both have had their successes and failures over the years, their consistent but unremarkable work horses, and their outriders who buck the trends. But album for album, America is that bit more consistent, reliable, but perhaps less prone to risk taking. This trend carried forward well past the early 1990s into the new millennium. Here are two such artists, both from Texas no less, who were chucking out quality death metal before the old school boom had really taken hold, and whose work will probably endure long past the shelf-life of many that followed.

As the name suggests, Houston’s War Master drink liberally from the cup of Coventry’s finest: Bolt Thrower. There are a few other ingredients mixed into the broth that is their debut LP ‘Pyramid of Necropolis’ however. Released back in 2011 when a return to first principles in metal was sorely needed, this oozes through every aspect of this album. The production hearkens back to those early Earache days when the guitar tone was so all encompassing yet not compressed to fuck, resulting in an impact that was more imposing and ambient than harsh and cold. Equally the drum sound is softened slightly, allowing for plenty of presence without weakening their impact or ability to cut through the mix.

But the real star of the show is War Master’s ability to blend the ultra-basic yet purposeful riff stylings of Bolt Thrower with some Swedish sophistication along with the way. War Master drive those dirgey, mid-paced riffs through a simple yet graceful kaleidoscope of rhythmic variation before slicing it in two with a sudden burst of speed or thrashy atonality, usually set to a d-beat or full on blast. For the most part however ‘Pyramid of Necropolis’ is kept to the slower end of death metal. working with the amoral indifference of Bolt Thrower riffs and splicing them with the outright evil of Carnage on ‘Dark Recollections’ or early Grave. The result is monolithically epic riffs that are  enhanced further when they are occasionally dwelt on long enough for the lead guitar work to emerge. At this point War Master sound at their most modern, indulging in some melodies that were created in the post industrial metal landscape, as they fixate on a basic refrain and repeat, something not often done in the early 1990s.

It’s important to note that to some ears War Master may sound overly derivative, but this is an oversimplification for two reasons. The first being how clearly they have put their stamp on a recognisable style. Yes all the right boxes are ticked if emulating old school death metal is the aim of the game. But in blending distinct traditions within this vast body of work, War Master also add their own signature to these building blocks. The second reason is the context that ‘Pyramid of Necropolis’ was released in. The old school revival was in its infancy in 2011. The likes of Asphyx and Autopsy had only really just kicked off the come back album boom. Younger metal acts were still dominated by liberal art renderings of black metal, ultra-trendy stoner doom, or the homogenous and mechanical world of melodic and brutal death metal. Such things were tired by 2011 sure, but the next chapter was not yet mapped out. Albums like ‘Pyramid of Necropolis’ provided the most viable and quality underground metal of the time not because it resurrected older aesthetics, but it resurrected the spirit that death metal embodied at a more vital and creative time.

Opting for more of a red, white, and blue approach on their debut LP, Blaspherian’s ‘Infernal Warriors of Death’ is the true son and heir to Morpheous Descends and Infester. These Texans combine that same frantic, rhythmic energy that death metal of this stripe inherited from hardcore, and combine it with slow, brooding passages ripped straight from slasher soundtracks, fleshed out by doom metal’s epic sensibilities. The down-tuned yet crunchy guitars place reworked thrash riffs into their hadron collider and smash them into more complex tritone or minor harmonies to create that truly imposing brutal death metal vibe. That is, brutal death metal before it was appropriated by endless slam riffers. The key function for a lot of these riffs is percussive. For that reason the snare drum is given a tinny ring to it that cuts through the fuzz and allows us to hear the increased complexities afforded to this instrument. 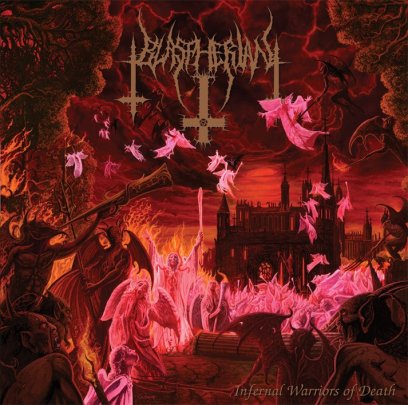 This is necessary because at times the guitars lack the clarity to carry some of riffs during the faster passages, and the drums afford us orientation. However, this is also one of the album’s strongest points. For much of the runtime the guitars act as more of a ‘presence’ than a fully realised vehicle for spinning out riffs. The result is an odd hybrid that one could only describe as atmospheric percussive death metal. Which is not unlike the aforementioned Infester on ‘To the Depths, in Degradation’. Whilst certain riffs and leads are clearly defined and contribute to the musical backbone of a track, they are equally happy to work through a more basic thrash or doom riff with a depressive bent to it. This creates an overwhelming atmosphere of fuzzy, imposing death metal, with the drums driving the structure and architecture of the piece.

With the more laboured chord progressions things become more conventional, but no less derivative, as these are granted additional impact when contrasted with the primordial soup of malevolent riffs that surround them. Early Incantation informs a large part of the mid-paced sections to this album, opting for a busier rhythm section that carries through the doomier passages with a greater purpose than is normal. This ensures that the music never drops below a certain momentum in time for the next lurch into a blast-beat, and chaos abounds. ‘Infernal Warriors of Death’ is a curious marriage of worlds that transcends both these elements.

So whilst it may appear that these albums are tapping into a long dead past for an easy buck, this is far from the whole truth. Both albums seemed to be written by artists that took a step back from the trends of the day and opted to subvert them rather than build upon them. And in so doing not only created death metal that holds up against the best the genre has to offer, but also pointed the way forward for death metal to develop incrementally, and without gorging itself on external influences to the point where honest intentions devolve into farce. They both understand the surface level appeal of classic death metal, but also carry forward its spirit, and most importantly placed their own unique stamp on the genre. Which is why these albums will endure well beyond many of the more derivative old school revival albums that came out in the decade that followed 2011. In terms of my pick of the week, I am frankly going to shirk responsibility as they are both fantastic albums. The choice will purely depend on a personal preference for crushing, mid-paced European death metal with meaty guitars and slow tremolo picked riffs, or percussive, thrashy death metal informed by NYC hardcore and no small portion of American grind. For me it’s the former.

One thought on “Death and Texas: War Master and Blaspherian”