HOR is new black metal outfit from Greece, which – based on the increasing number of newer Greek bands making headways overseas – is quickly reasserting itself as a black metal hotspot. ‘Exitium’ is their debut LP released in 2019. A streamlined and direct battering of four songs that stretch to just over half an hour, this album does not bother with preamble or elongated interludes. Taking the framework laid down by ‘De Mysteriis Dom Sathanas’ and stripping it back even further, HOR extend the narrative progression of this album into one that – despite the lightning fast tempos – slowly and gradually unfolds through minimal yet well thought out riffs.

Vocals are a distant howl, sometimes descending into spoken word, which again reminds one of Mayhem around the time of ‘Esoteric Warfare’, or maybe a Zyklon-B. There is a sense of finitude to the way the chord progressions are constructed. This is only augmented by the intensely melodramatic vocals, and the blasé nature of the deadpan spoken word narration. Aside from the vocals, the guitar tone, drum mixing, and execution are pretty much industry standard for black metal. But HOR don’t need to resort to anything too flash to embellish their music. 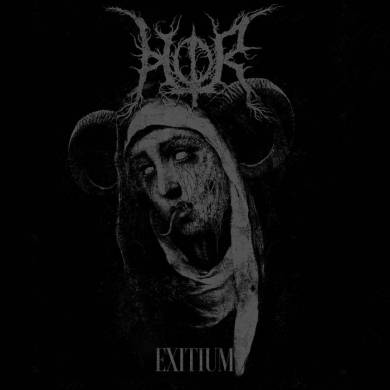 Given the short runtime and minimalist nature of HOR’s approach it is surprising just how much music is packed into ‘Exitium’. This album is sparse, clean, open, the opposite to a chaotic riff-fest hellbent on suffocating the listener. The soaring, in listening to the stripped back riffs held up by understated yet purposeful drums I feel like a weight is being lifted from my lungs. Despite all this however, it’s worth noting how much music is packed into this release. Herein lies one of the many curiosities to this album. On an emotional level this is a sparse, open album. Yet when one observes how HOR have gone about achieving this, with all the themes that they unpack in such a short space of time, one cannot help but conclude that the album is deceptively dense. There is no wasted space and no laboured breakdowns or extended passages of wind samples that grow tiresome on second or third listen.

Addressing this paradox further, it is interesting to note that HOR construct riffs out of the most basic chord constructions, and stick with them ad-absurdum, before driving through the most minor alteration by way of developing the theme further. The result is a mesmerising blast of hypnotic, repetitive black metal that squeezes every ounce of tension and drama from these simple shifts in pattern or tempo. The closing epic title track brings this to its logical conclusion with a slower first half, that gradually builds and grows in tension if not complexity, before the tempo creeps up and the guitars become more restless. Then suddenly things explode into a soaring three chord riff that is driven through a few variations, stripping black metal down to its most basic components to reveal the epic, primal heart of this music. And without any catharsis or logical conclusion, the music simply stops, fading back into the nothingness it arose from just as quickly. It is refreshing to see a band like HOR make such a powerful statement in this intensely minimal, back to basics context.

This release caught me off guard. Having been whelmed an entirely ordinary amount by the debut, I had almost no expectations for this release either way beyond more of the same, maybe with the production being given a new lick of paint and the musicianship tarted some. But I was wrong. Live Burial have pulled out all the stops and applied a sophisticated, almost progressive approach to their brand of frantic, varied death metal. The song writing has jumped forward a few steps to the point where I feel as if I’m missing a transitional album that got us here, because to be honest this almost sounds like a different band to the one we found on ‘Forced Back to Life’.

Tremolo picked riffs running through sophisticated melodies reminiscent of Incantation will give way to colliding breakdowns, only to jump into frantic yet straightforward death metal, experimenting with both tempos and key. They also make good use of dynamics throughout, sometimes subtly, simply by allowing certain chords to ring out whilst the bass is granted time to shine by accenting each note. The guitars, in granting space for the rhythm section creative space, are given a solid framework to build the music into patiently crafted crescendos and finales. The result is at once progressive yet epic death metal without any of the tiresome swagger that these tags usually suggest. Vocals, while remaining at the high end for death metal, are awash with reverb. They are also delivered with genuine feeling, adding a sense of drama that draws the listener in to the experience.

Although the playing is pretty technical in places, it avoids the common pitfalls of being overindulgent or working in weird time signatures for the sake of it. Each intricate drum fill, guitar lead, or tempo change works towards the final goal of melancholy, introspective death metal that nevertheless retains plenty of bite. As a result we must once again turn to the question of why ‘Unending Futility’ succeeds where similar attempts have failed. This album undoubtedly references many classics of the genre but avoids being as derivative as it might have been. Whilst the concrete reasons for this may be hard to pin down, I believe it is simply because ‘Unending Futility’ is not a one-dimensional release, unlike many recent albums in a similar vein. Yes, this is undoubtedly old school worship, but it captures the sophistication of death metal’s most beloved albums. One feature of which – and why they became classics in the first place – is a sophistication and emotional range lacking in other, less revered works. A lot of old school revival albums pick one or two features and rustle up an album around these scraps. Live Burial by contrast have stamped their own identity on this well-trodden ground, and in doing so have created an album with more diversity and ultimately a more enduring appeal than a lot of death metal currently floating around.

Mork’s third full length, ‘Det Svarte Juv’, is a fairly comprehensive tour of Norwegian black metal from its heyday, perhaps with an over focus on the black ‘n’ roll dead-end that took shape in the late 1990s. Far be it from me to second guess the state of mind of Mork’s sole member Thomas Eriksen, but it feels like an album that is trying to be as general and down the middle as possible. It’s as if someone was asked to create an album that sums up the entirety of black metal, with all its foibles and eccentricities. In that regard, ‘Det Svarte Juv’ is a fine offering. But beneath this familiar veneer one can hear an artist attempting to break free of these shackles and genuinely deliver something with hidden stories to tell.

At certain points it feels like we are listening to a re-run of Burzum’s ‘Belus’ with the imperfections ironed out. The music is more pregnant with possibility. The meditative, ritualistic nature to many of the riffs shines through whilst proceedings are kept at a fairly balanced pace; ideas are rested on long enough to see them develop to fruition, but they don’t extend out into truly imposing monoliths. But at other times it calls to mind post ‘Sardonic Wrath’ Darkthrone, with all the trivialities that come with it. As a result this strikes one as two albums played in unison…yet competing with each other. And this conflict is pretty much maintained from start to finish. Our concentration on the more transcendental aspects of ‘Det Svarte Juv’ is constantly broken by flat black ‘n’ rolls passages that are just as tired as the day when the subgenre became a thing in the first place.

Now might be a good time to elaborate on what exactly is wrong with this unfortunate offshoot of black metal (beyond lamenting the likes of Vreid and whatever the fuck happened to Satyricon). One interesting dimension of studying metal’s history arises when we look at it in the context of a movement not just with antecedents in rock music, but in direct conflict with it. Metal is not just an offshoot of rock, but one that is in a seemingly unending quest to transcend these more profane origins. This is true of pretty much all of metal’s subgenres to one degree or another. Metal as a cultural artefact doesn’t act with one mind, there is no pre-conceived goal or agreed upon destination for metal and there never was. So where you come down on judging metal that heavily references blues and rock will largely depend on how you feel about said styles, and whether you think metal is enhanced or held back by them. I for one believe that metal’s true purpose has always been to channel a sense of neo-romanticism via the modern techniques that are its mainstays. This is particularly true of black metal. And this where we must pass comment on black metal that heavily references rock music.

It’s out of place, for the simple reason that even some of the most generic, lazy black metal has an otherworldly quality when compared to other forms of metal. That’s why it ends up being such a marmite genre in the first place. A hot mess for some, a religious experience for others. But further, allowing it to be diluted by rock influences (the swing to the bass, the bact-beat, the four-bar blues) takes one out of the experience, it brings the listener crashing back to earth, and breaks up the epic and intricate narrative nature of the music. So…sorry Mork for using your latest LP to make this point, but I feel that this album demonstrates these shortcomings perfectly. It’s a fine black metal album, ‘Da Himmelen Falt’ is genuinely anthemic, opener ‘Morkeleggelse’ is subtle yet purposeful, and there are many other highlights throughout. But all too often we fall into rock trappings, and it breaks the experience up. Yet this conflict seems to be taking place within the album itself as the competing influences battle for airtime, which makes this an all the more curious listen regardless.