Texan black metallers Maiestas released their first LP in 2019: ‘Purgatorium’. It’s black metal that is – for the most part – informed by old school heavy metal and thrash. Although at times it comes across as a rather schizophrenic release. On the one hand it’s a primitive, dirty slab of classic no thrills metal with rough and ready production, yet on the other (left) hand, there are scattered demonstrations of a sophisticated adeptness for melody and polyrhythm. From the opener ‘Battle Charge’ we feel as if we are about to be treated to a revamped mash up of Bathory and Merciless, with some classic heavy metal lead work chucked in for good measure. But as the album progresses Maiestas throw in some very modern touches that turn these ideas on their head.

Drums are quite rightly very prominent in the mix, as they provide the basis for this music’s unadulterated force. Vocals take an old school approach to black metal stylings, which – although set to very different music – remind one of Vorph of Samael fame. And they are, of course, washed in reverb. Guitars are also given a very classic sheen to them, which allows enough clarity for the complex leads to shine through. But there is no nod to the modern, digital, clinical approach to mixing which is at last going out of style it seems.

For such a short album they pack in a lot of ideas. The pace is kept relatively slow for black metal, rarely picking the tempo up beyond mid-paced thrash. Despite this the drums manage to provide an unrelenting cacophony of noise, which is largely down to the near constant double bass and crash cymbals. Whilst this sits in a very traditional relationship to the barrage of school riffs Maiestas treat us to – everything is very much on the beat – they work in a marked percussive approach to the riffs which result in some interesting polyrhythms at times. This is an approach similar to Profanatica, whereby the chords devolve into sheer dissonance as a framework to hang these relentlessly pounding rhythms on top of. Some very structured guitar leads will then begin to soar above this rigid backing, creating simple cycles and phrases that build in intensity and undiluted weirdness as the track continues to build.

One can hear how the guitars are setting the pace, and the drums’ main purpose to follow their lead, providing a near constant barrage of noise, only occasionally emphasising a shift in pitch or intensity to the rest of the music. I would reference Insurgency from the UK, who utilise a similar approach to track construction. It’s one that goes all the way back to Discharge in terms of rebuilding music anew from the ruins of its own destruction. It’s the very rigidity of it that leads to an emergent complexity and allows Maiestas a hook to hang more complex and engaging melodies (sometimes guitars, sometimes clean singing) on top of this very unsettling basis. It’s definitely an approach to black metal that Americans seem to have mastered. There is both a hefty debt owed to the past with some very subtle flourishes that make this release just a bit weirder than your average old school revelry.

It’s sometimes interesting to learn what (fair minded) non-metal music fans think of our genre. It’s curious because metal is such an insular strain of modern music. Sure, it absorbs many outside influences. It even influences the world around it. But on the whole it’s a very self-regulating ecosystem. The big innovations usually come from within, the standards and commitment to them by fans and bands alike is almost draconian compared to the rest of the contemporary music world. I heard one critic refer to the fact that metal fans and artists have a very specific idea of what is expected of the music, and stick to these rules pretty faithfully as a result. The implication being that in terms of ‘new’ ideas and sounds, metal is a pretty static form of music. We know what we like and artists pander to it. A disingenuous and simplistic reading for sure. But to some extent, even if it’s half true…fucking good. Better a slow, patient testing of ideas with the occasional revolutionary watershed album that changes the rules than a disorganised gold rush of random ideas and no metrics by which to judge their quality.

Anyway, York’s Deathmace released an album in 2018 called ‘Bleeding Frenzy’. And based on the very specific standards and metrics metalheads use to judge an album’s quality, Deathmace have nailed it. However high minded we want to be about what originality is actually circulating around metal these days, sometimes an album with no original ideas and nothing new to say is just so good that it sweeps all these noble ideals aside, and we just get what we enjoy and enjoy what we get.

‘Bleeding Frenzy’ is essentially a high quality Master album, with a vocalist that sounds like Scott Carlson from back in the day. It’s rippingly fast, classic death/thrash metal that ticks all the right boxes. The guitar tone is sharp and crisp. The drums are executed flawlessly. There is more diversity and imagination in them than one usually gets on a Master album. They keep to a faster d-beat pace throughout, providing the energy and dynamism from which the rest of the music flows. Classic thrash and early death metal riffs abound, but there’s also a very pronounced hardcore punk flavour woven throughout.

It’s an album whose appeal rests solely on emulating a well-established style, and getting the job done. We can sit back in our armchairs smoking our pipes and point out that it’s just a Master knockoff. But Deathmace have actually beaten much older artists at their own game with this one. It’s a fine line between being derivative and actually perfecting a style. And for that reason I simply cannot fault this album, because the fact that it pretty much does only one thing, it does it really fucking well.

Dublin’s Celtachor walk a fine line with their last LP ‘Fiannaiocht released in 2018. In one sense it’s a very Irish take on blackened folk metal, that uses this medium as a backdrop for dramatic retellings of Celtic folk tales. So we get black metal vocals interspersed with a lot of melodramatic spoken word, with a very melodic sheen to it, there’s plenty of the obligatory fiddles, flutes, and folk flourishes to the riffs. All well and good. But Celtachor come pretty close to Finntroll tomfoolery at times. But there are a few saving graces that bring this album back from the brink. Just when they are about to go full tasteless cabaret, Celtachor reign it back in and keep proceedings pleasingly restrained. So, what could possibly provoke these pening remarks? Well, let’s crack the hood open and have a poke around shall we?

I used Nokturnal Mortum’s ‘The Voice of Steel’ as the benchmark for this genre. That’s just the way it has to be. I’m aware of albums sure, the dark meanderings of Negura Bunget, the bland highland trails of Saor. In fact one of the things I find interesting about blackened folk metal is the fact that artists tend to lean pretty heavily on regional music history. Whether based in a genuine study of traditional instruments and music theory, or an imagined authenticity given credence by poetic license, it adds an extra talking point to the music. ‘Fiannaiocht’ trades on a similar combination of authenticity and melodrama, bordering on obnoxious at times. 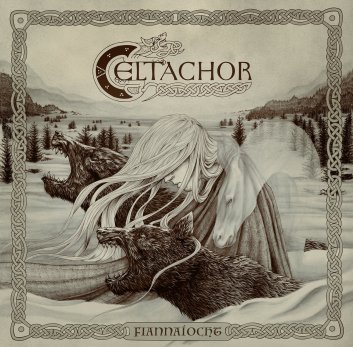 Musically it’s a wash of melodic black metal, with folk accompaniments scattered throughout, and for the most part they manage to stitch together a narrative build that reaches a pleasing climax towards the end of each track; which is more than many lesser entries in the genre can boast. The problem? Celtachor place too much emphasis on the stories they are trying to tell. Obviously marrying music with long, extended narratives has a long and rich history. Not least within metal. Further, the switching from traditional black metal vocal stylings to dramatic spoken word can work. But on ‘Fiannaiocht’ it occurs in such excess that it beings to break the flow of the album. Where the music should be picking up and gathering up the themes, it is cut off and meanders into a breakdown in order for Stephen Roche to provide more narration.

It feels like reading a book and being constantly interrupted, and then once you return you forget where you were up to. Celtachor’s approach to folk metal is competent, above average even. And Roche does frequently resorts to impressively adept clean singing which proves to be infinitely preferable to the clumsy podium style shouting. For that reason I would go further and call this release frustrating. Because one can hear the complex and rich folk metal and all of the elements that have gone into making it. But it is constantly hamstrung by this need to service verbal storytelling. They clearly have a passion for the subject matter, and there is a place for using this medium to such an end. But the music would need to take more of a backseat in order to put the stories centre stage. Instead we have pretty fun blackened folk metal that gets needlessly hamstrung by these poor stylistic choices.