The debut LP from Belgium’s Perverted Ceremony is a rare thing in this day and age; no gimmicks, no excess of surplus ideas, and no gratuitous aping of an older school tradition. In fact, they are so confident with the material on ‘Sabbat of Behezael’ that they tried to supress our ability to hear it beneath demo quality production. And I’m afraid it’s there that we must start when dissecting this specimen. Recording and producing a halfway decent sounding album is easier than ever  in this day and age. But it has led to an unremarkable uniformity across many different styles, with little to no consideration given for the kind of mix that would suit the music itself. Instead everyone seems fixated on what a wider audience expects a heavy guitar based album to sound like and mixes accordingly.

One way around this for budding young artists is to once again trawl the past for clues as to how the future could be shaped. And that’s precisely what Perverted Ceremony have done here, with a demo quality mix reminiscent of Emperor’s early material. But this somehow manages to avoid sounding ‘like’ your standard black metal fudge. The reason is – of course – the music that lurks beneath the static. Rather than these pronounced aesthetic choices being a distraction (or a cover for lack of character) as they so often are, it’s as if Perverted Ceremony wanted to test the metal of ‘Sabbat of Behezael’ by holding it beneath a four-track mix to see if the material would still stand up regardless. 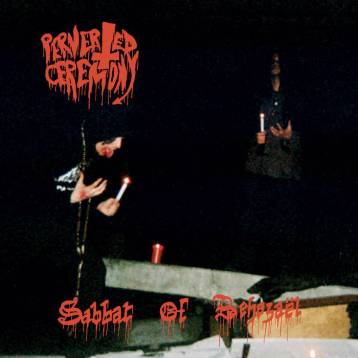 And stand up it does. ‘Sabbat of Behezael’ sits within that dark and primal tradition of American black metal of Demoncy and to a lesser extent Profanatica. Simple evil sounding riffs are worked through variations of speed and rhythm, layered with lead guitar harmonies. Although this album does not lack in rhythmic diversity, it really shines when a trance like chord sequence is picked up and run with, sometimes complemented by subtle low-end synths, other times by simple guitar leads. The repetition allows the listener to catch up with the music, and orientate their mind in the face of all the static.

Someone definitely sat in front of a drumkit during the recording of this album. They may have even played it for a bit in a way that connects up with the rest of the music. But it’s really more a suggestion of percussion than a dominant feature. In this sense the mix presents an interesting challenge for any competent drummer (as…ahem *checks notes* Morbid Messiah clearly is). Play too many complex fills and intricate rhythms and it gets lost in the fudge, but play too simplistically and the music loses all dynamism and drive. The result is a modestly balanced drum track that bolsters the riffs without outshining them; one that is only occasionally lost in the fray.

I’d stop short of saying Perverted Ceremony is bucking the trend or breathing fresh air all over my day. But they have reminded me of some underutilised virtues from black metal’s long dark past. Letting the lo-fi production qualities go some way to dictating the shape and form of the music sometimes yields interesting results. This self-imposed limitation that Perverted Ceremony have applied to themselves has resulted in some interesting and novel ideas that are sorely lacking on many of their more polished contemporaries. From the obscurity of the void, new life takes route.

No thrills UK death metal now with Manchester’s Foetal Juice, and their first LP ‘Masters of Absurdity’. This release is much more restrained and less tiresome than the name of the band or the cover of the album suggests. Going in blind, one would be forgiven for assuming this was another bowel movement from sunny Slamchester. But no, this is wall to wall classic thrash riffs chucked through the blender with some fluid tremolo picking for good measure. So Foetal Juice aren’t exactly splitting the atom with this one, but it’s an energetic and fun romp through the best of meathead death metal, that somehow doesn’t get boring despite almost never letting up throughout its near forty minute runtime.

There’s a couple of subtle tricks Foetal Juice have used to achieve this. One is being able to play their instruments. Although this is a relatively basic style of death metal, it still jumps from tempo to tempo and rhythm to rhythm with ease. The same motto applies to any style famed for being overtly simple: ‘cheap to those who can afford, very expensive to those who can’t’. In less competent hands the relentless chugging would be a source of tedium, but on ‘Masters of Absurdity’ it is a satisfying and comforting experience in all its familiarity.

Vocals jump from a mid-ranged bark to a higher end rasp, further adding much needed diversity in a field where this is in short supply. Drums have no problem linking up with the emphasis of the riffs, lending the music a sense of unity to guide us through a busy and frantic tour of atonal riffage. They do a good job of grounding the music as it switches between ideas without letting it grow stagnant. A competent skin bashing in support of the guitars without outshining them, made all the more impressive given how basic many of the riffs are.

To anyone who has heard death metal before, this album will hold no surprises. But it feels comforting and familiar nevertheless; like old leather. It’s a style that some people never grow tired of, and sometimes it’s just a joy to hear it played well and stripped of unwanted thrills.

Hagzissa’s debut LP ‘They Ride Alone’ is a tour of every fucking brand of old school black metal under the sun (with exception of Norway of course). Although it is remarkable how focused the album ends up being given how many classics it seems to reference in a relatively short space of time. The result is closest to early Sigh minus the unbridled eccentricities. Other obvious hallmarks are Celtic Frost via Samael; but again, where early Samael crafted the most basic of power-chord riffs into a malicious and brooding sound, the flat guitar tone on ‘They Ride Alone’ makes for a much more light hearted listen. The production is primitive but crisp, with everything caked in the requisite amount of reverb to achieve the occult aesthetic Hagzissa are aping here. Vocals are a theatrical pursuit in melodrama, working more as an avant-garde piece of spoken word that just happens to link up with the time signatures of the accompanying music by coincidence.

This brings to the conundrum at the heart of this release. The riffs themselves are so basic and generic – for a style that has had its fair share of both – that something else must be brought to the fore to justify it. Hagzissa know this, which is why they knitted some longer, extended bridges of overtly simple rhythm guitar work to serve as a backdrop for vocals that jump from maniacal screeching to deadpan clean chanting. All this is well and good, but for such a basic form it is missing that primal element of unbridled spontaneous creativity. Whether it be Sigh’s tendency to descend into unexpectedly epic prog rock jams in the middle of a three power-chord thrash number, or Beherit’s otherwordly conjurations, or Samael’s relentless, purposeful repetitions. By comparison, this seems contrived.

Hagzissa seem to know exactly what this music needs, and they attempt to spatter it throughout this album, but the connecting dots are missing. Credit where it’s due, certain riffs and vocal melodies do jump out, but there’s scant few to hold the attention. In between these moments is a substandard journey through frustratingly basic riffcraft with little to recommend it beyond the music it references. So I am left to wonder if they really understand the appeal of the stripe of black metal they are playing in. Shove some simple riffs together, cover it with an evil aesthetic, and occasionally descend into an ‘evil’ sounding breakdown or pick things up with a mid-paced blast-beat. Part of the joy of well written occult black metal on first listen is never knowing just what is going to happen next, but also being fully aware of longform compositions that the musicians are unfolding before your ears. Here, attempts at drama are scattered throughout, but the attention span required for music of real character is lacking. All the life and spontaneous joy seems to be sucked out for the sake of a flat colour-by-numbers of an album. Nevertheless, some melodies and riffs stand head and shoulders above the rest, making this album worth at least a spin. They are few and not connected with the music that surrounds them, but very much present.

One thought on “I like the beats and I like the yelling: Perveted Ceremony, Foetal Juice, Hagzissa”