Chile’s Praise the Flame are a classic throw back to pre-1990 black metal, one that seems to have passed the world by (myself included). Their debut LP ‘Manifest Rebellion’ released in 2015 is heavily rooted in the past, but with some very modern flourishes. At it’s core it’s a straight-forward death/thrash release with some references to old school Sodom and Sarcofago thrown in. Although the guitar tone is fat and rich, the bass cuts through this din like a hot knife through butter. Doing justice to this oft ignored instrument in death metal, it calls to mind the bass track on ‘Legion’. Drums are a machine gun blast of tight rhythms, sometimes expanding into chaotic fills and crashes in the spaces between the riffs, but ultimately acting as the rigid and ordered backbone of the cacophony, keeping all the other instruments in line. 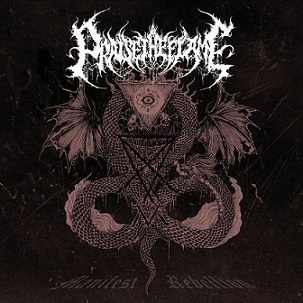 As the language to describe the strange and alien world of distorted vocal techniques and approaches has not been formalised in the same way as traditional clean singing, we are forced into more subjective ramblings about the impressions that different vocalists leave on us: the listener. On ‘Manifest Rebellion’ we are confronted with a very relaxed approach to guttural death metal vocals. Whatever pitch or timbre a vocalist adopts, there is a tendency to push the performance to the very limits of one’s abilities. An arms race of extremity and aggression that runs parallel to the music itself. Notable exceptions aside, it is refreshing to hear such an understated and – as a result – ghoulish performance on what is an otherwise undeniably violent form of metal. This nonchalance stands in welcome contrast to the speed and off-kilter music, adding an unsettling dimension to this already novel death metal.

In many ways ‘Manifest Rebellion’ is all the more intriguing for what Praise the Flame refrain from doing when compared to many of their contemporaries. Despite this being a chaotic and violent piece of music, the self-assured and relaxed vocals coupled with a conspicuous emptiness beneath the music makes this both an energetic and atmospheric album. Other artists may have been tempted to use interludes, samples, or modest backing tracks. But Praise the Flame stick with the basics, with each track taking its time to get into full swing and taking its time to fade out. Indeed, the spaces in this album make clear that – despite the speed and aggression of the main bulk of music – Praise the Flame are in no hurry to batter the listener into submission. What they have in store is a more imposing and ultimately more rewarding experience.

Let’s take a look at Yorkshire powerviolence quartet Gets Worse and their latest LP ‘Snubbed’, released back in 2019. This – like their fellow Loiners The Afternoon Gentlemen – laces minimalist hardcore with aggressive regional humour. Although here we are treated to samples from British comedy classic The Thick It rather than David Cameron dispassionately listing the price of cheap booze. The production is decent but unremarkable. The snare has the requisite tinny sound that allows each and every blast-beat to cut through the mix, lending the music its hyper, indecisive quirk.

For all the words I’ve penned on the gradual entropy of metal subgenres in the age of web 2.0, it’s interesting to see similar things occurring in the peripheral genres of grind and hardcore punk. Whilst powerviolence flagbearers Full of Hell integrate their take on this intersectional subgenre into a unified experience, ‘Snubbed’ is a chimera of hardcore, thrash, grind and sludge that plays up to the schizophrenic turns this music lends itself to. All four members contribute vocals which run along the same boundaries of the genres Gets Worse reference. Slapped together half-formed ideas gradually coalesce around the genesis of ‘structures’ before entirely collapsing in on themselves, sometimes into a sludgy dirge, sometimes into chaotic but short-lived blasts of aggression.

Part of me really enjoys the directionless nature of this music. It is so chopped up, so mutilated beyond what conventional or even unconventional structures demand, that it’s totally disorientating in a way that extremity of noise alone cannot achieve. Sure, the album is divided into ‘tracks’, but listening without reference to this makes the end of one track and the beginning of another completely meaningless. From doom, to random outbursts of vocalisations, to breakneck grind, it all loses purpose when slapped together with illogical revelry.

But the problem with ‘Snubbed’ is that despite being a competent and slick iteration of this idiosyncratic hybrid, it’s just not all that remarkable. Neither as quirky and funny as some of their contemporaries, nor as outright violent and crushing as others. It may be an enjoyable gateway release, or a staple for many fans’ rotations, but I cannot envisage its legacy extended much beyond that.

The debut EP from London’s Sufferer ‘War on Life’ is an interesting little chestnut. Part Swedish death metal in the manner of Unleashed, part clusterfuck of unresolved tritones, and part nightmare of theological histrionics in the manner of Teitanblood; the end result is far tighter than these disparate loose ends suggest. I’d like to think that if Varg was playing death metal during Burzum’s ‘Aske’ era it would sound something like this. Undeniably black metal, with all the long form compositions that comes with this label, but with the rhythmic formality  of thrashy Swedish death metal, and a meaty guitar tone thrown in for good measure.

Although the production is demo quality, it is decent enough to at least imply the amount of power that Sufferer probably require for this blend of blackened death metal. Vocals are melodramatic and at the forefront of the mix, carrying forward the religious themes of the intro and outro that bookend the metal tracks. There are multiple vocal tracks at different pitches and ranges, which as mentioned before, calls to mind Teitanblood, although disciplined into a more rigid structure here.

When considering Sufferer’s approach to blackened death metal, drums are presented with something of a challenge. Unlike the melodic and NWOBHM stylings of Dissection or Dawn, Sufferer instead make use of extended passages of tritones crafted from early Burzum and Mayhem riffs. They then collide these with more straightforward thrash or the simple, punky death metal of Unleashed. As a result, the drums are unable to settle on a more relaxed rhythm track of mid-paced blast beats or a much tighter Slayer-esque approach. The result sits somewhere between the two as and when the music requires; and ends up doing a fairly decent job of holding the music together.

In the Hadron Collider of death and black metal, Sufferer adopt a novel and under-utilized approach to marrying the two. The result may be a little disjointed; the connecting passages between straight up thrash and the droning black metal is lacking at times. Nevertheless, on ‘War on Life’ Sufferer’s direction of travel is into waters few dare to travel.

3 thoughts on “I like the beats and I like the yelling: Praise the Flame, Gets Worse, Sufferer”