Industrial’s influence on extreme metal is probably greater than I tend to give it credit for. For all its shortcomings as a genre, some industrial has a unique atmosphere and energy to it that – when properly harnessed – is all its own. Its history has been almost as long and rich as metal’s, although with more misses than hits along the way. For that reason, aside from plucking a few choice cuts from this vast archive, it is interesting to track its influence on traditionally guitar-based music. Outside of industrial metal acts proper that sprung up in the late 1980s, let’s take a look at two examples of a less obvious industrial lineage; one from black metal, one from death.

Finland’s Desecresy have been throwing out LPs at an impressive rate and quality in the last few years. All follow a similar structure and approach, but each one builds on the last in cautious, logical steps. Following in the footsteps of those masters of mid-paced death metal Bolt Thrower, the backbone of their music is those chugging riffs backed up by pounding double bass, overlaid with minimal yet powerful leads. Imagine Bolt Thrower circa ‘The IVth Crusade’ onwards, but with the mechanical production of ‘Realm of Chaos’, that’s pretty much what Desecresy are serving up.

‘The Mortal Horizon’ (2017) sees them focus their approach and lengthen their attention span. Desecresy on previous releases have always been victims of their own originality. The ingredients are death metal, but when mixed by these Finns they turn into something different. Micro songs all of a very similar design give rise to something akin to ambient music in structure, as the intensity builds and falls irrespective of where we are in each track. Lack of variety in the guitar leads can also induce a disorientation in the listener. But the quality of the music, combined with the sheer charisma of the cold, inhuman delivery, has always held an appeal.

On ‘The Mortal Horizon’, broadly the same techniques are utilised, but with a greater focus in the riffcraft department. The structure has a logic more in line with metal traditions than the electronica and dark ambient of previous releases. It is amazing how a little extra dynamics, tempo shifts, and through-composed riffs can completely change what is at the level of timbre, the same music. Yes, the production has been cleaned up somewhat, the reverb has been reigned in, the drums are more varied and clear, but aesthetically this is largely the same as previous Desecresy albums.

They have also dumbed down the Bolt Thrower worship, veiling it behind the renewed focus on more complex leads and how they can determine structure. One should also not under estimate the power of quiet/loud contrasts and how they can shape music to the composers will. The result is laid back, minimal death metal that aesthetically has more in common with industrial and electronica than it does anything metal. But the underlying compositions are in a simple yet imposing death metal tradition; akin to early Amorphis playing industrial music.

Black Funeral of Texas has had a long and divisive career. Helmed by one Akhtya Nachttoter (…), he has never been afraid to explore new boundaries for black metal, points of crossover with alien styles that others in metal have shied away from. This has of course produced mixed results, but I nevertheless welcome the effort. When not dipping into dark ambient and noise, the core of Black Funeral’s music is stripped back, extremely lo-fi black metal with an almost mechanical quality to it, which the programmed drums only go part of the way to explaining.

On 2016’s ‘Ankou and the Death Fire’, this ritualistic and minimal approach was married with more melodic and energetic riffs reminiscent of the Swedish school. Whereas previous releases laced the repetitive, jarring riffs with static, lending them a claustrophobic quality, here the cacophony has a muffled quality to it. This lends the music the feeling of being recorded outdoors, yet emanating from a distance. The ambient passages between each track further add to this emptiness. Although he cannot resist ample wind samples, his use of this filler technique is somewhat more intriguing than we’re used to. The music will merge and fade into the noise, and is granted added texture when layered with minimal dark ambient. 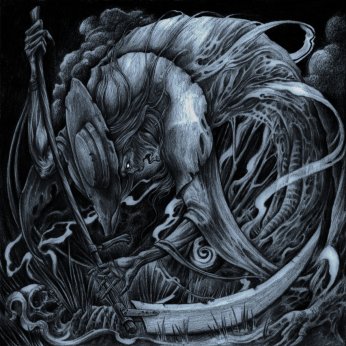 This is combined with a more mournful quality to the music than we are used to. Previous releases – whether noise or pure black metal or dark ambient – always played up the ‘evil’ aesthetic. It was raw, ritualistic black metal bent on creating a very specific atmosphere. This approach is particularly susceptible to failure, the kind of failure that tends to generate a humorous response. On ‘Ankour and the Death Fire’, Akhtya Nachttoter has opted to play it safer with the idiosyncrasies, but underpinning this is delicate, melodic riffcraft reminiscent of a lament at some moments, a call to arms at others.

Look for antecedents in early Graveland, as well as the heavy emphasis on repetition as a narrative tool. This may not be Akhtya Nachttoter’s most unique release, but it is undoubtably his most consistent both in terms of quality and execution. But more than that however, it is a fully realised piece of music, where previous releases were susceptible to moments of brilliance marred by utterly eyebrow raising cringe.

Two unique little curiosities on the peripheries of their respective styles, but both just falling short of genius. Why is that? It seems that both these artist’s talents lie in harvesting ideas and pointing to new potentials within the bounds of what we would consider familiar traditions within extreme metal. When it comes to the execution of these ideas however, they smack of squandered potential. Desecresy’s ‘The Mortal Throne’ is the more frustrating release, because it is more unique. One can feel these familiar components twisting and morphing into new space for death metal and just falling short in the clunky, flat pacing of the album. For that reason, although Black Funeral’s AATDF is more typical of black metal, there is an undeniable creative and talent to the riffcraft that just makes the music more stimulating on an emotional level.