Summer is over, a sense of finality is setting in, can we make an end to this decade with anything other than a morbid question mark?*

Sometime the Wolf.: From Here and Earth

The UK goth scene has certainly been eating its greens lately, especially in the north. The scene is now going from strength to strength, thanks in large part to the dedicated ministrations of Carpe Noctum, Goth City Promotions, and Tomorrow’s Ghost Festival. It seems somewhat fitting then, that the rise and rise of Preston’s prog metallers Sometime the Wolf. has been nurtured within the womb of this small but loyal community. When metalhead’s finally cotton on to these guys (and they will), the goth scene will always claim them as their own.

This year saw the arrival of their much-anticipated debut LP, ‘From Here and Earth’, flawlessly walking that dangerous tightrope between goth and metal. At its most superficial level, FHAE comes across as Fields of the Nephilim playing Paradise Lost. Vocalist Drew Freeman is unmistakably channelling Carl McCoy, with a hint of the (now disgraced) Rob Miller of Amebix and Tau Cross fame. Many of the guitar leads are worthy heirs of the unmistakable melodies of Gregor Mackintosh. But STW’s influences run much deeper than this. Indeed, they draw from such a wide pool – from Pink Floyd to Mogwai – that it’s a wonder ‘From Here and Earth’ succeeds at all.

But succeed it does, and the reason is very simple: it’s ‘well put together’. And that simply means that each component part – each bassline, rhythm, arpeggio, and melody – is engaging in its own right certainly, but they are seamlessly fitted together in service of this flowing sonic tapestry of epic progressive metal. Each track offers a treasure trove of moods and atmospheres that engage both the intellectual and emotional level. They utilise a wide range of techniques to create drama and tension within each track. This means they avoid relying too heavily on any one of them. For instance, STW are masters of the art of crescendo, but rather than lean on this as a crutch, with each new iteration they will add new layers and refrains that both anticipate the music to follow and call-back to what has gone before.

STW are one of those bands that wear their influences on their sleeve without sounding derivative. This is because they have taken the best aspects of each and blended them together into a fully realised musical experience. With post rock’s sense of dynamics, metal’s power and energy, the technical prowess of prog, and the melodic sensibilities of goth; in lesser hands mashing all these together would at best sound hammy and contrived, at worst a straight up hot mess.

Fields of the Nephilim could get away with playing the same four chords for ten plus minutes because they used this as a hook to hang dynamics, atmosphere, tension, and would build atop this otherwise simple foundation. STW often make use of a similar technique, but rather than letting the music settle on one refrain for extended periods, they build it into the next riff, the next verse, the next finale, making full use of dynamics along the way. The result is at once atmospheric, earthy prog metal with energy and a sense of purpose.

‘From Here and Earth’ seems a fitting way to round off a good decade for UK goth. And it will quite rightly make many people’s best of 2019 lists I’m sure. But the reason for its success as a work of art is really very simple; I can witter on about this very stylised music and its multifaceted approach to compositions until the light takes us, but it’s all surface level adornments that provide the foundation for music with heart. Without that they would be meaningless. One of the reasons I find this such an impressive album is that the musicians have not been carried away with their ambitions, from the production to the riffs to the concepts, all have been disciplined into a tight and unified whole.

In many ways the true heir to Sarcofago’s legacy, Chile’s Slaughtbbath return with their second LP, ‘Alchemical Warfare’ released this September. These days we call this ‘blackened thrash’. It’s rippingly fast, primitive, atonal thrash metal channelled through the blender of sporadic tremolo strumming and tritone breakdowns that lends it that early black metal feel.

The production is anything but old school however. Compression is the name of the game, with any nod to subtlety expelled. This unsubtle power provides the foundation to the relentless pummelling that is ‘Alchemical Warfare’. All the ingredients are there. Riffs leading the way, with simple shifts in pitch dictating the intensity of each track, and drums free to switch tempos and rhythm almost independently of the guitars. Vocals are a basic monstrous growl that cuts through the mix surprisingly well given the overpowering guitars, all lyrics being easily audible. With such a tight rhythmic foundation, solos are free to come and go as they choose, again adding intensity sans tempo changes, rather than determining the direction of the music.

With all that in mind I am somewhat torn over ‘Alchemical Warfare’. On the one hand it is exactly my bag. Maybe I was dropped on my head as a child, maybe I’m intellectually deficient, but I just can’t seem to get enough of these primitive, thrashing riffs atop relentless blast or d-beats. I would happily listen to nothing else. And Slaughtbbath certainly tick these boxes with a thick, black line.

On the other hand ‘Alchemical Warfare’ is not bringing anything new to the table even if we channel down to the compositional architecture beneath the noise. Now I’m the last person you’ll find criticising lack of originality. Most bands that try and develop themselves as musicians from album to album fucking suck. If you’re on to a good thing – which Slaughtbbath have been since their inception – then don’t change. But I cannot in good conscious recommend AC as an objectively worthy album, because I am acutely aware that my love for it is because there’s something wrong me.

One can appreciate it as a flawlessly executed representative of its style. But there’s no shortage of primitive blackened thrash – even within the career of Slaughtbbath – to make this a notable addition to the archives. But if you suffer from the same mental shortcomings as myself (and I know there’s a few of you out there), then ‘Alchemical Warfare’ is the business.

It’s about time I turned my attention to Leeds’s OND, and their self-titled debut EP released in 2018. Despite being revoltingly young, they know their onions when it comes to old school thrash with a progressive twist. Riding that line between primitive, punky metal and full on progressive thrash, their music has no shortage of catchy riffs and neat little breakdowns.

This is just as well, because OND’s lyrics and vocals are dripping with that subversive sense of humour that seems unique to us Brits. Now I don’t care for anything remotely enjoyable in music, whether it’s a sense of fun or anything designed to invoke laughter. But it works here for the same reason that it works for artists as diverse as Voivod to Immortal. It’s not only underpinned by intelligent music of quality, but that music seems to be in conversation with the lyrical themes. The riffs are filled with subtle flourishes and licks that simultaneously compliment the structure whilst adding to the subversive humour of OND’s music. 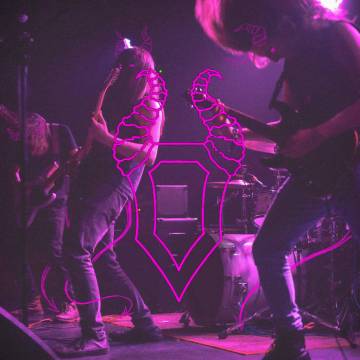 The vocal style itself is very punky, which goes for the foundation of many of the riffs as well. But built on that foundation are hints of more ambitious prog metal leanings, as with many of the solos and melodies, notably the intro to ‘Claw of Bombay’ for instance. For that reason it’s all the more admirable that OND rein in their prog metal tendencies in the service of what is clearly supposed to be primitive, fun, energetic thrash metal. It leaves enough intrigue to stand out from the crowd, but never loses site of the virtues of good old-fashioned primitivism in thrash, and how this can be used to compliment rather than hinder the technical aspects.

‘OND’ is a uniquely British product. Which again, is a rare phenomenon in thrash metal. Sure, Britain has produced some of most important moments in metals’ history, but thrash has never been our strong suit, and there has never really been a unique ‘British’ thrash sound. OND may be a little too weird for some people’s pallet. But I see much promise in this EP, and look forward to more come 2020.