Swedish death metal owes as much to d-beat punk as it does to Slayer. Although you can hear this like a backbone through the classic releases of its household names, for the death metal enthusiast, it’s really worth going back to the very early works of these artists to really get a sense of how this music developed. To learn where it came from, and why the artists that eventually emerged onto the international stage were considered a breed apart from their thrash and hardcore punk forebears. The two artists selected this week split up or changed name before releasing a full-length, so we’ll be doing it a bit differently by looking at compilations of their early demos released posthumously.

Nihilist are a well-known treasure trove for any Entombed fan, being essentially an early incarnation of this giant of death metal. When creative differences with guitarist Johnny Hedlund forced the band to split, they reformed as Entombed, and Hedlund went on to form Unleashed. This, and the impact they made with their small clutch of demos on the international stage, makes Nihilist pretty much the creation myth of Swedish death metal. Just a few years after Florida’s Morbid Angel and Death were making waves.

So what to make of the music itself? Of the compilation of their works from 1987-89 released in 2005 we can see their development from a primitive thrash punk outfit to a more menacing and mature beast as the buzzsaw guitar sound kicks in, and the vocals morph into that mixture of anger and pain characteristic of Petrov’s style. Like the early works of Morbid Angel on ‘Abominations’ (1986), the appeal of this music, the reason it grabbed so much attention internationally, was the sheer enthusiasm of the playing, and the marriage of elements that at the time, people thought should not go together. More mature minds could not have created this.

There was a time when punk and metal were at loggerheads. But now their shared history is a cause for much celebration. Nihilist  combined punk and thrash metal (and even some heavy blues in places) with all the enthusiasm of youth. Contrasting styles and influences that older musicians would never have believed could work. This earned them a reputation among more established musicians. When one considers that in metal circles Sweden is almost synonymous with death metal, these demos deserve all the more respect as a little piece of history because it put Sweden on the death metal map.

A less well known forbear comes in the form of Grotesque. A collection of early demos was made available back in 1996 entitled ‘In the Embrace of Evil’. Although of lesser known pedigree than Nihilist, this is a fascinating artefact for the death metal enthusiast. Made up of vocalist Tomas Lindberg of At the Gates fame, and Necrolord, who is responsible for some of the most loved album covers in metal. So what to make of the music itself? The production, as with Nihilist, varies from demo quality to passable lo-fi extreme metal. Lindberg’s vocals are more typical of metal of this flavour at the time, before he developed the unholy noise found on ‘The Red in the Sky is Ours’ (1992).

In terms of metal, this sits in that little time capsule between black and death metal, pre-Mayhem, post-Bathory. Where extreme metal was a homogenous blob. There’s plenty of thrash riffs thrown in, but we see the beginnings of grounding riffs in tremolo strumming rather than shredding. This is important because it is not just another technique among many here, we witness it becoming a key anchor for the music, it dictates structure and mood. This puts Grotesque closer to black metal in many ways, and indeed you can hear where the Norwegian artists would diverge in shedding the thrash elements completely. 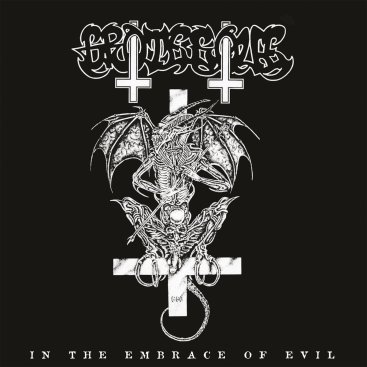 Although the music of Grotesque is fast, it never falls completely into blast beat territory, sticking more to Slayer tempos. But importantly, the rhythm does not inform the structure of the song. Rather shifts in key and riff dictate the direction of the music, and the rhythm section is guided by the guitars, as opposed to most rock and metal which is the other way around. This was a key innovation of hardocre punk artists such as Discharge. One that Slayer ran with and developed. Grotesque continue this development and apply a darker, more evil aesthetic to it through the use of minor keys as well as power chords. This is an important distinction between death and black metal proper and thrash and heavy metal. Like I said, fascinating little time capsule for interested parties.

Let’s be right about this then, purely in terms of quality and sophistication, ‘In the Embrace of Evil’ is the superior release. But in terms of posterity, for Swedish death metal and the evolution of extreme metal as a whole, Nihilist’s early works are the more important and influential release. But I’m going to go ahead and say in this context that doesn’t matter. Many of the tracks on these demos were re-recorded by the band as Entombed, polished up with full on buzzsaw sound exemplified. But for sheer enjoyment on an intellectual level the Grotesque demos are just more developed, one step further along the road, a more realised musical achievement.