It’s 1995, some of black metal’s most revered works have already been released, and many of the musicians responsible are now behind bars. But the movement is stronger than the murderous actions of one or two people. Music is louder than words and wider than pictures. Well, it’s certainly louder than murder anyway. What better way to celebrate the year of rebirth that was 1995 than by looking at two wildly divergent artists who were both well established at the time, but for very different reasons?

Immortal require no introduction. Famed for *that* music video, some of the most entertaining photoshoots in the history of rock, and in 1995, for what some were dubbing ‘blizzard metal’. So called because 1995’s ‘Battles in the North’ sounds like a blizzard, and it was chronologically situated in the middle of Immortal’s clutch of blizzard metal albums…all so called for similar reasons. Furthermore the lyrics are about snow and associated inconveniences. Anyway, let’s not mince words here, the first time I listened to BITN I thought I was listening to some very early Immortal demos, being presented with what can only be described as half an hour of impenetrable noise. But no, this is Immortal’s third studio(?) album, and the second to feature Abbath stepping up for percussion duties as well as bass and vocals.

But Abbath the poor lad just cannot keep up here. 1993’s ‘Pure Holocaust’ had some problems in the drum track department, but there was enough reverb and layered guitars to divert the inattentive listener from missed beats and appallingly executed fills. Here there is no such respite from the pounding tin can, as his sloppy playing is front and centre in the mix. I am forced to conclude that this was the chief influence for Lars when the time came to mix the warm diarrhoea  that was his drum takes for ‘Saint Anger’.

But no need to dwell too long on this odd step taken on BITN. Once one moves past this for long enough to focus on the riffs we are treated to some pretty classic guitar work from Demonaz. Although the multitrack guitars and intricate leads of ‘Pure Holocaust’ are largely absent, Demonaz does pave the way for the blackened thrash direction that Immortal would eventually take. Beyond pounding and simplistic power chords are some truly euphoric tremolo strummed riffs set in perfect contrast to moments of primal aggression and noise. Of course these are occasionally drowned out by Abbath’s vocals, which are absurdly high in the mix. His trademark mid-range black metal rasp does truly take form here, but he manifests so close to one’s ear that all the secrets of this technique are revealed. We hear every breath, every pained convulsion of his throat.

Some might say this adds to the authenticity of the experience. Others might say it interrupts what are at times surprisingly graceful black metal riffs. Lastly, structurally, this album is rather disjointed. I love the fact that no track extends too far beyond four minutes and I love the fact that the sum total is barely half an hour long. Brevity is an underrated virtue in today’s world of limitless digital content. But one must not forget to make an ending for a piece of music. On BITN Immortal apparently just lost interest towards the end of some of these tracks and simply cut the tape. I have been listening to this album for many years now and I still do a double take and check my sound system when this happens. But again, one could spin this as a final fuck you to those after a more refined stripe of black metal.

For an entirely different sonic pursuit we turn once again to the fertile soils of Greece, to an artist called Varathron. Name dropping Varathron inevitably occurs in the same sentence as Rotting Christ, and while there are similarities in their sound, Varathron were to approach black metal with arguably even more 1970s heavy metal influences than their scene mates. Their debut, 1993’s ‘His Majesty at the Swamp’ is arguably a classic doom metal album with a black metal aesthetic and a death metal vocalist. 1995’s follow-up ‘Walpurgisnacht’ took things in a more symphonic direction. 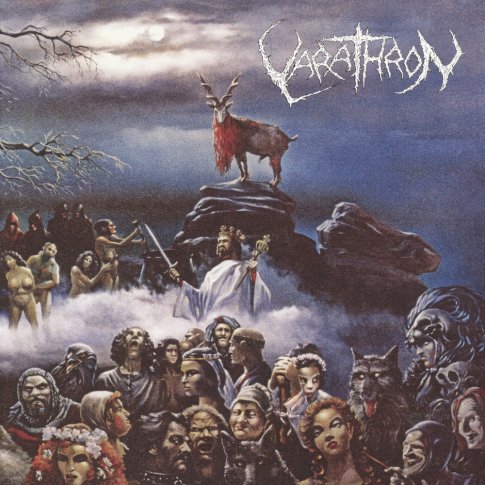 Make no mistake, this album is about as mellow as can be for one that still features break neck blast-beats, tremolo strumming, and guttural death metal vocals. But the production has been cleaned up, with drums and bass cutting through the mix with clarity underneath guitars that quite simply ooze melody and class. This is backed up by distant vocals that would be well and truly at home on a death metal album, but here are set distantly in the mix to add texture and depth. Occasionally Stefan goes clean with chants and calls laced with reverb. Synths are used sparingly but wisely to underlay prolonged instrumental sections of harmony and melody and interweaving tremolo riffs.

All this makes for a  rich yet crystal clear album that does sit well and truly in the black metal camp, but has no need to rely on energy or profanity to make an impact. The album wears its low impact approach on its sleeve, which means it may take a few spins to truly be drawn in, but the persistent listener is amply rewarded for their time with some of the best in symphonic metal that the mid 1990s has to offer. Vararthron proved to have all the staying power of their peers Rotting Christ, but where Rotting Christ were overly prolific, Varathron offered sporadic releases of an exceptional quality.

So coming down on the side of musical quality alone it will come as no surprise for the reader that I am landing on the side of ‘Walpurgisnacht’ on this nacht. I may have been overly critical of ‘Battles in the North’, after all it is one of the easier targets when it comes to Norwegian black metal. But it did set a precedent for brutality and uncompromising noise within a genre that in 1995 was in danger of boarding the cheese wagon with Dimmu Borgir and Cradle of Filth. Whether antidote to this, or a series of bizarre choices on the part of Abbath, its place in history as a polarising album is well deserved. But on a serious note, Varathron were unfortunately doomed to live in the shadow of countrymen Necromantia and Rotting Christ, but for the connoisseur of Greek metal, travel on, for many rewards await you in the discography of Varathron.