‘The Story of Anvil’, released in 2008, follows failed Canadian heavy metal band Anvil as they embark on a disastrous European tour and endeavour against all the odds to release their thirteenth studio album ‘This is Thirteen’. The film opens with footage of Anvil playing at a festival in Japan to a packed out crowd back in 1982, on a tour with Bon Jovi, Whitesnake, and Scorpions. We are treated to various soundbites from the likes of Slash, Lars Ulrich, Lemmy, and that bloke from Anthrax, explaining just how big they were, and how metal would not be what it is today without Anvil. We then cut to thirty years later, where founding members Lips and Robb are still working at menial day jobs, yet still following the dream of international metal stardom. A dream that for these two aging rockers, should have died long ago.

Director Sacha Gervasi (a long-time fan of Anvil), manages to treat the film’s subjects with objectivity and respect, he avoids showing them in an overly sympathetic light, perfectly capturing some highly relatable human characters. Despite Anvil’s many failures and some truly excruciating moments, we still find ourselves cheering these guys along.

This film has often been referred to as the real life ‘Spinal Tap’, but these Canadians are devoid of the British pretension and sense of entitlement that left audiences feeling that Spinal Tap were deserving of their many misfortunes. Anvil are honest people who believe in following their dreams, even after decades of failure. They work hard at their craft and pour their soul into everything they do.

Unfortunately for them however, this means the overarching experience for the audience is comedy alongside some truly moving moments. I cannot help but take a closer look at the mechanics of why this is so funny, especially when it’s a heavy metal band. For instance, ‘Some Kind of Monster’ made for funny viewing, but this was overshadowed somewhat because it exhibited the members of Metallica in such an unpleasant light. It was funny because Ulrich and Hetfield are such dicks and we enjoy watching them fail. The members of Anvil are likeable characters, Lips wears his heart on his sleeve and approaches life with boyish wonder, drummer Robb is more reserved and thoughtful but you can tell he truly cares about his best friend and their shared dream.

Comedy springs from many wells. Timing, the unexpected, the pathetic, the absurd. It’s the latter two that form the comedic structure of spending time with Anvil. These people display a rare passion for what they do. But what they do is play over the top rock ‘n’ roll well into their fifties and well after success has passed them by. They have risked financial ruin and sacrificed any other career they could have had for what are essentially silly over-the-top songs about rocking.

I can think of two scenes in this film that illustrate this point particularly well. The first is between Lips and his older sister. Anvil have tracked down respected rock producer Chris Tsangarides, who recorded Anvil’s classic album ‘Metal on Metal’ back in 1982, and he has agreed to record and produce their new album ‘This is Thirteen’. Anvil now need to raise £13,000 to get the recording done. After trying many avenues to no avail, Lips’ older sister offers to lend them the money. In a moving scene she explains that despite everything, despite all this time, she is still willing to invest in her brother’s dream. It goes beyond humouring him, beyond her sharing his vision, to unconditional love from one sibling to another. The camera zooms out and reveals Lips sat beside her listening, clearly moved beyond words, and we the audience are carried along in a universally human moment. We are then reminded that the dream they are discussing is recording a silly heavy metal album. Our brains are unable to accommodate these two facts at the same time, despite being shown irrefutable proof that both facts exist in the real world. The result is comedy. If the brain is unable to comprehend, it will produce laughter.

The second such moment is during the recording of their album. The contrast in personalities between the emotional Lips and the reserved Robb often leads them to clash. At one point they almost come to blows in CT’s studio. Lips lays his soul bare about how he has suffered and sacrificed for the last thirty years for him and is tired of him not showing the same commitment. Again, the universal human moment would touch any audience deeply. Two life-long friends hashing out some deeply held resentment that has clearly been building for some time. But what they are arguing about is a metal band called Anvil, whose most famous song is called ‘Metal on Metal’, and who used to play guitars with a dildo as a performance piece.

The brain has knowledge of two real facts. But it cannot retain them both in tandem. The universe becomes absurd, laughter prevails where comprehension fails. The question that Anvil poses for us is this:

For our purposes, for melodramatic art read ‘heavy metal’, and for subtle art read ‘not heavy metal’. Although we could indeed apply this to many forms of music and many other artforms, we’ll focus on metal for now.

The answer lies in nothing more complex than a gamble, a high stakes game where the chance of failure results in not just bad art, but funny art. And this applies to both the experience of consuming as well as creating it. We must question premise 3. A silly art-form like metal fails far more than it succeeds, even by its own standards. But we keep coming back to it. I cannot help but speculate as to the reason. The rewards of melodramatic art when it succeeds are emotionally and spiritually more cathartic.

This could apply to many other silly art-forms in music, film, theatre etc. So I’d like to develop this point by drawing a parallel with wrestling, which unless I’m much mistaken is undergoing something of a renaissance lately. Now we all know wrestling is about larger than life characters in silly outfits, playing out a melodrama with unbelievable plots punctuated by rehearsed stunt shows. But if you buy into it for a second it can make for gripping drama. The big budget shows of WWE in its heyday were certainly ridiculous, but sometimes, when the mood was right, the stunts and the acting good enough, and the audience were carried along even for a moment, a uniquely captivating melodrama would unfold before your eyes.

When you look at matches such as Shaun Michaels vs The Undertaker, and The Rock vs John Cena, there’s a silly back story and build up sure, but what follows is a live show with impressive stunts and over the top acting that carries even the cynical along for the ride. These are Greek tragedies for the modern age. Much like a religious ritual, if you are unaware of the meaning behind each chant, costume, or sacred symbol, then the actions, movements and song would seem incompressible, ridiculous even. But if the moment is fully committed to by the individual, then reality can fall away, even for a  brief moment, and a world of fantasy takes hold. 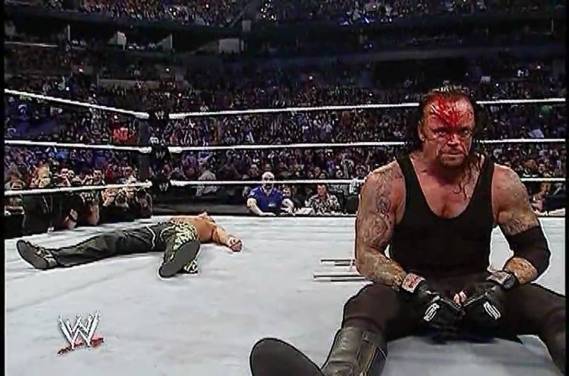 ‘The Story of Anvil’ is poignant to metal and other over-the-top forms of art because it illustrates the meaning of tragic failure. It also shows why this becomes funny for the observer when confronted by the pathetic. Too much goes wrong in Anvil’s performances, whether it’s the fact that they play to 174 people in a 10,000 capacity stadium, or their legal dispute with a promoter in Prague that saw Anvil finally get paid the agreed 100 euros for a show, or whether it’s them playing at a community centre for guitarist Ivan Hurd’s wedding to a crowd of confused elderly relatives and awkward children, the cogs at work behind their music are on full show. Suspension of disbelief becomes impossible.

But the reward for when it goes right is too great to give up on because of these risks. For instance, in the finale to the film, Anvil play a show in Tokyo to a packed out crowd of devoted fans at 11:35 in the morning. In this one final scene the reason why the members of Anvil put themselves through so much embarrassment and sacrifice for their forgotten craft becomes apparent.

Metal has been haunted by comedy since its inception.  As it has developed and grown as a subculture it has found new and delightful ways to make us laugh again and again. As an adolescent it is sometimes hard to accept that a great portion of the subculture you have invested so much of your identity in is comedic, absurd even. But over the years it becomes easier to accept that we do inhabit an obscure pocket of artistic expression with its own running jokes and shibboleths. And it is possible to accept this in tandem with letting oneself get swept away in the experience all the same.

When the art form is dramatic, obscure, niche, and passionate all at the same time the possibility of cracks appearing and the spectre of failure morphing into comedy increases exponentially. But when the cracks do not appear, when we (artist and audience) ‘get away with it’ so to speak, then we are reminded of why we take the risk. And no band knows this better than Anvil. They deserved their success far more than a lot acts that made it, and it’s all the more shameful that it happened to such endearing characters.

One thought on “The Story of Anvil: The endearing comedy of art that tries too hard”