Following the rebirth of Swedish extreme metal in the form of Nihilist and Grotesque came a plethora of artists set to take the world by storm and pioneer a style of simple yet grandiose death metal that is still cherished today. Here, we discuss two of the best.

At the Gates formed out of the ashes of Grotesque. After releasing an unexpectedly innovative EP ‘Through Gardens of Grief’ they landed the now seminal ‘The Red in the Sky is Ours’, released in 1992. The first thing that strikes one about this album is the rather conventional guitar tone, which was to prove a onetime only outing for these Swedes. Much has been written about the definitive buzzsaw sound, shunned by At the Gates here, so I will leave the details to someone that knows about guitar pedals, lurking on Google probably. It lends a degree of power and menace to this primitive, NWOBHM inspired death metal, but proves to be far too cumbersome for anything more technical. For this reason early At the Gates opted for a sharper guitar tone. The music on ‘The Red in the Sky is Ours’ is nothing short of a progressive, almost avant-garde death metal masterpiece. Far too subtle for the buzzsaw.

Whilst the violin adds a certain melancholy to this surprisingly mournful death metal, employing a full time violinist for this outing may have been surplus to requirements. It is rare to find metal of any stripe that utilizes dual guitars to such a sophisticated extent. The melodies play off each with a primitive baroque flavour to it. Drums weave underneath this complex tapestry of melody, harmony, and occasional dissonance. Vocals stick to a high pitched screech that lends brevity to lyrics that deal with sorrow, paranoia, and loss.

Although this album is a much loved classic among fans long time frameans, At the Gates could not resist a piece of the action enjoyed by the likes of Entombed, who were launched onto the world stage around the same time. Future works by this artist were to devolve gradually into standard ear bludgeoning affairs, before culminating in the ever popular ‘Slaughter of the Soul’, ear candy for nu metal fans looking for something harder. There is something to love in all of their works to date however. Nothing will ever come close to what is quite possibly the most sophisticated work of European death metal ever released all the way back in those early days.

Dismember very much represent the opposite side Swedish of death metal to the one exhibited by At the Gates. Made up of one half of Nihilist, these musicians are self-confessed Autopsy worshipers who raided their early works for ideas and riffs. I believe that this characterisation does their music a great disservice however. It disguises a remarkable degree of diversity and depth of composition that is present on their debut ‘Like an Ever Flowing Stream’, which dropped in 1991. 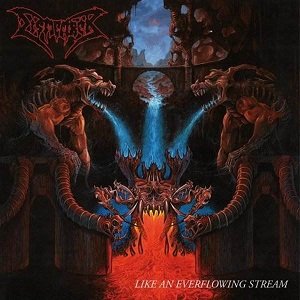 This album, along with Entombed’s ‘Left Hand Path’, is often considered to be the definitive example of the iconic Swedish guitar tone mentioned above. Its significance lies not just in its instantly recognisable imposition on the eardrums, but because, more than other variations on distortion in death metal, it has a direct impact on composition. One cannot play overly technical or jazzy death metal with this effect, the result would be a confusing fudge of noise, and not the good kind. ‘Like an Ever Flowing Stream’ flows…..from old school thrash riffs to melodic tremolo strumming passages seamlessly, exemplifying some of the most aggressive music death metal has to offer but with a healthy dose of mournfulness and fear in the face of life’s finality.

Riffs and solos combine to display a profound sense of the epic, expertly contrasted with the more primitive numbers without coming across as overly jarring or out of place. Indeed, there seems to be two flavours of tracks present on this album, which when knitted together in playing order form a tightly cohesive whole. One is shorter, punchier, primitive thrash metal, that harkens back to the early days of death metal when it was still struggling to distinguish itself from its older cousins, with lyrics focusing on the classic themes of gore, violence, death, and sadism. The second points to the future, with longer run times, more expansive composition, neoclassical leads, and narrative structures as opposed to verse/chorus. Dismember were to walk this line with varying degrees of success before disbandment in 2011.
Vocals are of the gruff, guttural end of the style, aggressive yet fairly low in the mix. Displaying a similar sense of drama found on early At the Gates, Matti Karki is prone to the occasional outburst, where a certain lyric, or single word, is bellowed with such conviction and despair, which lends an almost operatic level of drama to this otherwise aggressive delivery.

So of these classics of not just Swedish death metal, but the school at large, which can be said to be the superior release? Of the two, ‘Like an Ever Flowing Stream’ is certainly the more typical release, albeit an exceptional one. Dismember were to mimic the formula of this album for the rest of their career, and have left a lasting legacy on primitive death metal at large. This legacy is a reminder that ‘primitive’ does not have to mean ‘limiting’, and one can work intricate and sophisticated composition, narrative, and riffcraft into simple but not simplistic death metal. However, such is the strength of the material found on ‘The Red in the Sky is Ours’ that its inheritance is one that the genre largely failed to absorb. That’s not to say that this album is somehow the Brandenburg Concertos rendered in extreme metal form, but it does point the way for how this music can finally shed its rock routes, indeed its contemporary music routes, and truly draw influence from the likes of Bach in more than just name. In this way its lack of legacy is similar to Gorguts’ ‘Obscura’ or Athiest’s ‘Unquestionable Presence’.

These musicians themselves could never quite recapture the heights of this album, and indeed with the departure of Alf Svensson, their gradual descent and mutation into The Haunted seemed inevitable. Watching their decline is almost as fascinating as watching the ascent of an artist, with signs, warnings and gradual changes that point the way to how a musician can go from such heights to lowest common denominator music over a number of years. Shame as this was, there will always be albums like ‘The Red in the Sky is Ours’ to look back on and enjoy.