Listening to classic thrash metal of the mid 1980s, it becomes apparent that it really had more in common with punk artists like D.R.I. than it did with the heavy metal of the previous decade. The aggression, the speed, the atonal riffs formed exclusively from power chords with frantic structureless soloing, the socially conscious lyrics, all of these things grew out of hardcore punk and thrash before they grew out of any metal artist.

Discharge formed in the late 1970s in Stoke-on-Trent, and like many second generation punk bands they took the politically conscious elements of punk and distilled them to shouted slogans rather than fully formed lyrical passages. The music followed suite by distilling the most extreme elements of what was already a pretty abrasive art form for the period. By the time Discharge released ‘Hear Nothing, See Nothing, Say Nothing’ in 1982, the music had been reduced to two minute hyper fast micro pieces, with two riffs, sometimes three, a frantic solo, and a distortion pedal that transformed the guitars into an air raid siren, delivering a sense of urgency and finality to the barked two line rants of vocalist Cal. Rhythmically, like most things in punk and metal at the time, it worshiped Motorhead. The classis d-beat style was perfected on this album, and earned Discharge a place among the few artists who have actual subgenres named after them. This d-beat is an important step, and it is one that marks extreme thrash and death metal as truly distinct from their forbears (besides the intensity of the music itself). 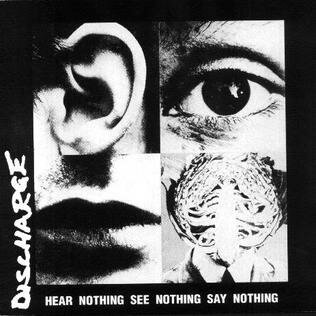 The drums ride over the top of the guitars but are not the chief drivers of rhythm, which means the riffs are the primary tool to announce shifts in tempo and structure. Although structurally the music of Discharge is as basic as they come, this one simple innovation was to prove pivotal for the evolution of extreme metal. It freed the drums up to be creative in their own rite, sometimes as a lead instrument, rather than simply part of the rhythm section, and it freed the guitars up to explore song structures through complementary riffs rather than a verse and a chorus and a bridge. Combining this speed and extremity with unconventional time signatures and scales lifted from jazz and prog-rock was to prove to be the building blocks of death metal proper as opposed to extreme thrash metal. Lyrically this album pushed punk to take itself more seriously. The messages may be simple, repetitive, but they are also urgent when shouted over these hyper fast three power chord riffs. Guitar music had never been this extreme, and it sounds unbearably intense today. Discharge were still very much a punk band however, lacking the maturity in structure universal to all metal.

D.R.I are a slightly more complex beast. Their debut EP ‘Dirty Rotten’ released in 1983 made waves for its hyper fast drumming, aggressive vocals, and socially conscious lyrics. The track ‘No Sense’ is one of the earliest examples of the blast beat used in extreme music outside of jazz. But 1985’s ‘Dealing With It’ amalgamated much of this primitivism into a surprisingly mature approach to song writing. It also earned them yet another subgenre demarcation known as ‘Crossover’, with metalheads and punks showing up in equal numbers to their shows. And listening to ‘Dealing With It’ it’s easy to see why. Songs range from chaotically fast hardcore punk outbursts lasting less than a minute apiece, to unexpectedly developed thrash metal jams accented by almost neoclassical soloing, showing a patience and understanding in how to develop song structure and use it to build tension and intrigue. The lyrics are not as aggressive as Discharge. They are spoken through the eyes of an insecure, paranoid young man trying to make sense of the world around him, unable to reconcile the patriotism and conformity of his parents’ generation with deeply held values of respect for individual expression and horror at imperialistic wars abroad and cynical capitalism at home. The contradictions of a paranoid America during the Cold War manifest in a young individual, force fed propaganda about the superiority of capitalism whilst rejecting the world of pervasive advertising, hedonism, and patriotism. 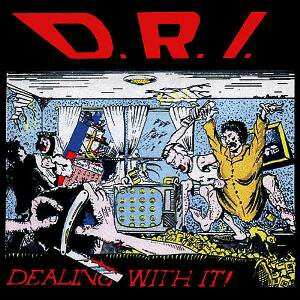 Musically, this is a far more developed work than ‘HNSNSN’, and its influence across thrash and grindcore and eventually death metal are obvious. However, it is a distinctively American affair. Beyond the strong American accent of vocalist Kurt Brecht which some people would find off putting, the lyrics deal with the unique complexes of American youth, and the style of thrash punk is heavily embedded in the skater punk scene that was exploding across the States at the time; although D.R.I.’s popularity and musical prowess extended well beyond this subculture. That’s not to say that you have to be American to truly get this work. But Discharge’s statement of aggression and protest holds a more universal appeal for scenes on both sides of the Atlantic. Essentially D.R.I.’s offering is a vulnerable and thoughtful release despite all the speed and the shouting, whereas Discharge offers us an aggressive and defiant statement behind the chaos. Neither need be the superior or more mature approach per se, but there is something about the apocalyptic atmosphere to ‘HNSNSN’ that makes one immediately stand to attention and take stock of society’s ills. I love ‘Dealing With It’, compositionally superior to many of its contemporaries, but if I once again force myself to come down on one side or another, Discharge’s offering proved to stand the test of time and the heaviness it would bring.