There are many different interpretations of original sin throughout the history of Christianity, so much like the leaders of its many sects over the centuries, I’ll just pluck whichever one suits at the time. As a psychological condition in western populations it arguably pre-dates the rise of Christian Europe. The history of the west has been one of conquest and genocide dating back to the destruction of the Neanderthals. We can only wildly speculate about the psychological states of individual humans throughout pre-recorded history. But whenever the heat of battle has cooled, and the life of relative peace flourishes on fertile soil, the eerie feeling that the abundance was undeserved lingers. The idea that it is not just undeserved, but born of genocide, is passed down the generations. Our prosperity is always built on the bones of the past.

With the rise of the Greek intellectual around 800 BC came the universal concept ‘good’ in western thought.  This ‘good’ applied to all people, all places, and all times. Whatever noble intentions these philosophers had in offering definitions of the Good, it provided an impossible benchmark for the populace. For Socrates, Plato, and Aristotle, you could and should aspire to the Good certainly (as defined by them). But the ultimate ‘good life’ would remain unattainable for the average pleb. Inescapable guilt intensified. That there is an abstract Good – the ‘ought’ at the centre of every choice we make – coupled with knowledge of its impossible standards, can only end in pervasive anxiety, or a rejection of the very idea of the Good. What results is a life of vice, gluttony, sloth, and greed, with any pleasure that could be gained by these things checked by knowledge of our own evil.

So by the time the early teachings of Christianity spread across Europe, it found a pre-existing collective guilt to latch onto. The psychological foundation on which to build a new guilt: original sin. Some theologians believed that through good deeds and regular confessions and reprisals original sin could be overcome and salvation in the afterlife attained. Whether this alleviated individual anxiety we may never know. But it certainly places a dread burden on individuals. Every aspect of life was interpreted through the jeopardy of the immortal soul, with the confessional as the referee, the guide to one’s proximity to salvation.

Despite the rise of more psychologically humane interpretations of sin, the guilt has remained. If you generally do the right thing, and leave the world better than when you found it, salvation is probably in the bag. In today’s secular age, atheists have been trying to find new ways to give meaning to life beyond the individual. We all fear death. And this is not limited to the physical act of ceasing to exist, but that our existence will leave no lasting mark after a few decades. A range of responses to this despair have flourished over the last century and a bit. 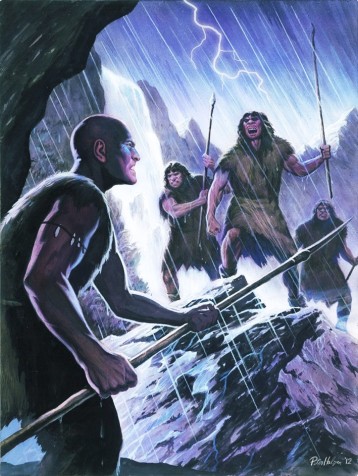 When Nietzsche declared that ‘god is dead, and we have killed him’, he asked – in his characteristically manic prose – what would rise to replace it? This was not just a question about moral incentive. It was a question about the what this meant for the collective psychology of Europe. How will we act if every measure we use to judge the value of an action and the value of a life is pulled from under our feet?

Many argue, in light of capitalism’s triumph over the 20th century, that it is a universal, all-encompassing philosophy which stretches far beyond economic arrangements. The dying light of global Christianity’s influence has been the only value system with the power to offer a legitimate alternative to free market values in the West. But now that light is out. And the lurking beast in the darkness – the real threat to unfettered economic growth at the beating heart of capitalism – is our world’s very physical limitations.

Science has been making the case for the limitations of Earth’s resources for decades now. And whether voices speak out in denial or affirmation, they speak out on a daily basis. But the human infrastructure we have inherited from the 20th century has yet to assimilate this knowledge into a roadmap of action. From climate change deniers, to the one true Good that is economic growth, the future of our planet continues to play second fiddle to benchmarks of success that belong in the last century. 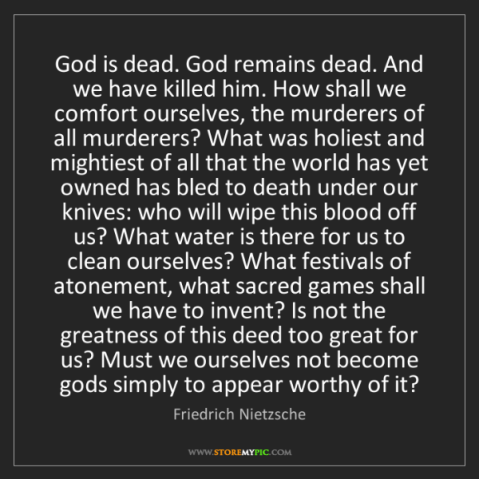 The facts of global warming and resource depletion present new and unique challenges for all societies. But they sit very neatly on top of societal debates that are centuries old. We are all blamed for humanity’s failure to take stock of the problem. We are all asked to recycle, use energy saving lightbulbs, and consider air miles when holidaying. But in reality multinational corporations and national governments powerless to curtail their excesses created the world we interact with day to day. The changes we on the ground can effect are limited, and even if they do take the form of national trends (5p plastic bag charges for instance), the impact on the industries that supply us is slow to take hold, and limited in scope. The little guy versus the big machine. A story as old as humanity itself.

Equally, we talk of living standards, resource consumption, and collective responsibility against the reality that those consuming and owning the least live in areas worst effected by capitalism’s excesses. Half of humanity has had little to no hand in creating our current predicament. Yet we talk of universal responsibility. A convenient framework that sits atop a centuries old colonial mentality. What is true for the white man must be true for all humanity.

So what does original sin have to do with this? Talk of climate change is measured in decades, if not centuries, in fifty years x will happen, in two hundred years y. We are incentivised by a future most of us will never see. The abstract notion of the survival of our race is hard to square with buying local today. Certainly harder than the very personal notion of one’s own immortal soul that incentivised good Christians. But then, we are told, think of your children and grandchildren. But somehow the message doesn’t stick. The ten commandments of Moses has been replaced by a disparate set of recycling systems across councils, clean air regulations, air miles, and plastic bags. Even the present warning signs around the world don’t hit home because they aren’t hitting home. It’s happening somewhere over there. And at home, it will take more than a heat wave and a wet winter to galvanise a population. 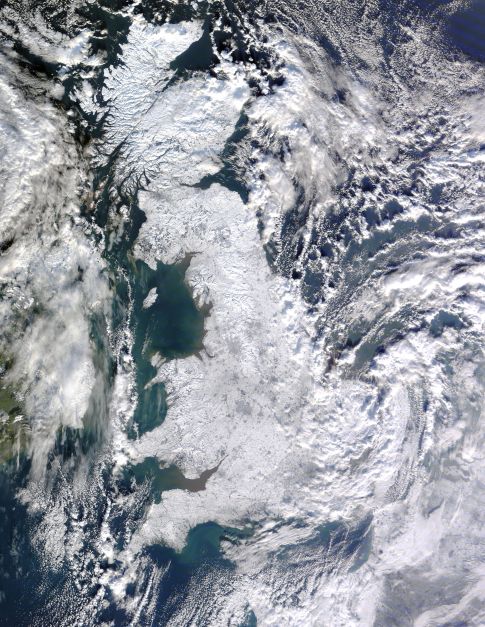 The ideas themselves are easy to grasp, but the relationship to the bigger picture is much harder to imagine. We undertake daily actions with a view to securing the survival of our species, then we are told that Volkswagen cheated on emissions tests, that a world leader doesn’t buy into the threat at all and offers more subsidies to fossil fuel industries. One good deed is immediately cancelled out by a wasteful hamburger the next day, or cancelled out a thousand fold by the twitter feeds of politicians.

The basic idea behind original sin was to make people moral by using a tangible and personal incentive. Carbon footprint reductions have no obvious individual benefit. To speculate further, there’s a sense in which we don’t even want to prolong the survival of our species. If the end game is ensuring that future generations can prosper we are left with the fact that we as individuals will be long forgotten. If the narrative used to spur action stretches too far into the future, appeals to the welfare of distant offspring who may never know who we were will eventually lose their efficacy. But the idea that our own demise, our own individual mortality is somehow bound up with the final demise of humanity, offers a degree of grim comfort in a way.

If we are to be the first few generations to die in the knowledge that death is the final end, and the only traces of our existence are held within the memories of people who will also die, then maybe we can take comfort in the fact that no one will be around to be ignorant of our existence in a few years. Because no one will be around at all. We were cogs in the mismanaged machine that was humanity’s death rattle,  a unique honour in human history, a once in a species occurrence. 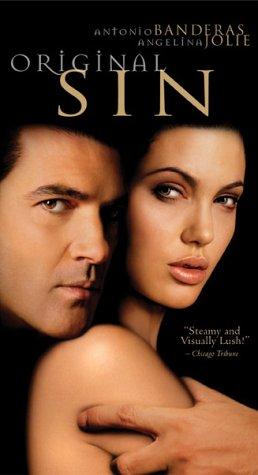 We shed our guilt. Because it is the only logical response to a system that sees governments telling us to live a certain way. The same governments that failed to regulate industries that caused humanity’s jeopardy in the first place. Maybe the system is incapable of dealing with a problem so universal. Maybe films that depict humanity uniting against a common threat are simplistic in the light of bureaucracy’s iron cage and the wilful ignorance of the powerful. But, the guilty, sinful many don’t know what to do about it. So we turn away. Like the church that laid down the law from on high, run by a clergy that indulged in the worst kind of sin they claimed to abhor, we reject a corrupt moraliser even if the banner they march under is ultimately righteous.

In this light, all the fabricated nightmares of Christianity are slowly materialising in the real world. There is a very real and present threat to civilisation, a self-made apocalypse, our own judgement day. The world will decide our salvation or damnation based on what we do now, as individuals and collectively. Humanity bears collective responsibility for this threat, but not in anything approaching equal measure from person to person. And the impotent powers laying commandments from on high are as hypocritical as they are right. The guilt and helplessness we all feel in the face of these forces is nothing new. And maybe the confused and contradictory responses of humanity to our doomsday has been repeated throughout history. Only this time the global threat was real. It was not the echoes of our genocidal past. The night terrors brought on by ancient texts and imaginary super-beings. It was not fictional salvation as the ultimate incentive to do good. This time the planet decided once and for all to put us out of our misery.

One thought on “Global catastrophe and original sin”